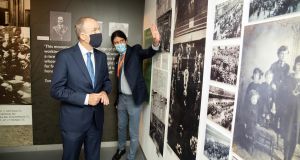 Events such as a new exhibition and book telling the story of nine men who lasted 94 days on hunger strike during the War of Independence can guide future generations on conflicts, according to Taoiseach Micheál Martin.

Speaking prior to a visit to the new exhibition at Cork Public Museum, Mr Martin said he hoped events from the Decade of Commemoration would provide fresh insights and understanding for young people on how independence was achieved almost 100 years ago.

To coincide with the new the exhibition entitled, “Suffering the Most – the Life and Times of Tomás Mac Curtain and Terence MacSwiney”, Cork City Council has funded a new book on the Cork Hunger Strikers, telling the story of the men who went on hunger strike with MacSwiney in August 1920.

In all, 65 men went on hunger strike with most attention focusing on MacSwiney whose death in Brixton Prison on October 25th 1920 made headlines around the world. Two others who died in Cork, Michael Fitzgerald from Fermoy and Joe Murphy from Pouladuff, have also featured in the story.

Nine men in Cork County Gaol continued with their hunger strike even after their three comrades had died and only stopped their strike on advice from Arthur Griffith on November 12th, 1920. It came 94 days after they began refusing food – the longest known case of people surviving on hunger strike.

The book, which is written by local historian Conor Kenny, a descendant of Grenagh man Joseph Kenny, tells the story of each of the men and how they came to be interned in Cork County Gaol, as Joseph Kenny’s granddaughter, Claire Cronin revealed.

“My grandfather Joseph Kenny was one of the nine survivors – he was the oldest of the nine who went the 94 days. He was 43 at the time and a father of seven when he was imprisoned and my mother was actually born when he was in jail on hunger strike,” said Ms Cronin.

“My mother had all his papers and I started putting them together with two of my cousins and about two years ago. With the centenary coming up we started researching the hunger strike because we realised there was nothing about it because the nine survivors just fell between the cracks.”

Like Claire Cronin, Ann Crowley is very proud of her grandfather, Peter Crowley, who was just 20 when he joined his older brother John and fellow Ballylanders men Michael O’Reilly and Chris Upton on the hunger strike demanding the reinstatement of their status as political prisoners.

“They were eight in my grandfather’s family but only he and his sister had children so there aren’t a huge number of later generations to carry on the story and keep it alive. My father, who is also called Peter and turned 90 in December, is one of the last links,” she said.

Curator of the Cork Public Museum Dan Breen said the museum was delighted to have an opportunity to highlight the sacrifice of the nine men as their story had long been overshadowed by the story of Cork’s martyred Lord Mayors, Tomás MacCurtain and Terence MacSwiney.

“Obviously, the murder of Tomás MacCurtain in March 1920 sent shockwaves here in Ireland and Terence MacSwiney’s death in October 1920 reverberated around the world, but that seemed to diminish everything else in its wake,” he said.

“The hunger strike was obviously promoted at the time and was recognised by the people in Cork because you can see from photos in The Cork Examiner.

“Obviously, the men’s own families knew about their sacrifice but now with both the exhibition and Cork City Council’s funding of the book by Conor Kenny, the men will finally get the recognition they deserve.”