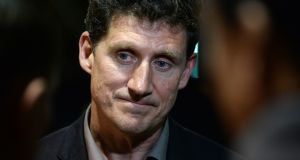 Eamon Ryan said the right-to-die legislation ‘hasn’t been discussed at Cabinet and we haven’t discussed it yet with our own party’. File photograph: Dara Mac Donaill /The Irish Times

Green Party leader Eamon Ryan has said there is a real possibility of a conscience vote on right to die legislation when it comes up for debate next week in the Dáil.

The Dying with Dignity Bill provides for people who are terminally ill to decide the timing of their own death and was introduced last week by People Before Profit TD Gino Kenny who said it will be debated next Thursday.

He asked Mr Ryan to support a vote of conscience “not only in your party but across the Government parties”.

Mr Ryan said the legislation “hasn’t been discussed at Cabinet and we haven’t discussed it yet with our own party”.

He said however “my understanding is certainly from our own party’s perspective that such flexibility or such an approach is a real possibility.

“It is not the norm in this House but where there are matters of complex conscience and very different views that tends to be a possibility. I certainly would not rule it out.”

The Minister for Transport said he would let Mr Kenny know the party’s approach when they had a discussion on it.

He added that each political party “would really have to speak for itself in tune with the approach suggested by the Deputy, that this is not something which we would divide on on party political grounds”.

The Bill would give the legal and medical right to authorise voluntary assisted dying for people suffering from a terminal illness. The legislation is supported by cervical cancer campaigner Vicky Phelan and right-to-die campaigner Tom Curran.

Earlier this week Sinn Féin said it would support the legislation going to the next stage when it comes up for debate. The party’s housing spokesman Eoin Ó Broin said “there are different views inside our party on it, but not having a debate, I don’t think, is not a solution for anybody”. Similar legislation came before the Oireachtas previously unsuccessfully.