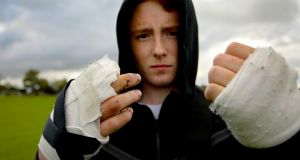 Fireworks casualty: Seán Redmond (17) was injured on Monday night when a firework exploded as he was holding it. Photograph: Crispin Rodwell/The Irish Times

He was playing among a group of friends in Palmerstown Park with a new, increasingly popular firework called Hot 8.

“They let off eight shots all different colours, about 40ft into the air. There’s some noise off them. One of my little brother’s friends, he’s 14, was there. He was holding the packet for me. I took one out and gave him it to hold so I could push through the plastic top on it to get the fuse out. I wanted to light it real quick because someone else in the park was lighting one, and I wanted to get mine in the air at the same time. So we let off the first seven shots,” says Redmond.

Then everything went wrong. Instead of shooting up before exploding, the firework exploded in his hands: “I seen all the boys running; all I felt was both my hands were really warm. I crossed my arms and put my hands under my arm pits. I saw there was blood splashed all over my friend’s jumper. Then I looked down at my left hand and saw my jacket was melted into my new tracksuit. I looked at my right hand and saw the top of my finger was gone and my thumb was blown that way.”

He was shooed away from the first house he went to for help, but the second called an ambulance. In Connolly hospital he underwent seven hours of surgery on his hand and was discharged on Wednesday.

“Today it is very sore,” he says on Thursday. “I’m getting flashbacks, waking to the sound of fireworks in my head. Every few hours I have a ringing noise in my ears.”

He will not be able to use his hand for months: “I will have problems when I’m older and in cold weather,” he says. This week, he posted a graphic photograph of his bloodied hand on social media.

Imploring friends not to be like him, he says: “Boys I’m begging yous all to not play with fireworks . . . I’ve learned that the hard way I’m on the mend now.” The post was shared more than 600 times, giving hope young people are taking heed.

Tuesday and Wednesday nights were quieter. However, Thursday was “like a war zone”, with one woman near Le Fanu Road saying she has all but given up reporting the “nightly terrors” to gardaí.

Last month she replaced a window damaged by a firework, costing €400. Gardaí face fireworks being thrown at their vehicles if they come. “They don’t get out,” she says. “It’s not safe for them.”

Ballyfermot is not alone. While normally fireworks and bangers are expected in the run-up to Halloween, this year predominantly working-class areas have been enduring them since July.

Now they are a nightly occurrence, hurled at shops, homes, passing vehicles and even people across Coolock, Clondalkin, Drimnagh and Darndale. And this behaviour is causing “huge anxiety”, especially to older people and pets.

Fireworks are illegal under 1972 legislation and gardaí can confiscate them from anyone without necessary authorisation. But this is not happening often enough, say locals.

This week he, along with Minister for Justice Helen McEntee and the Dublin Fire Brigade, launched an anti-fireworks campaign, Operation Tombola, weeks earlier than in previous years.

Young people around Ballyfermot believe fireworks are being bought in Northern Ireland and sold to everyone, including children “out of cars”. “You wouldn’t need to leave Ballyfermot to get them,” says a 16-year-old.

Residents who talked to The Irish Times would not be named, fearing reprisals, though many feel the authorities tolerate, or ignore anti-social behaviour in poorly-off areas.

“This isn’t happening in places like Sutton or Howth or Ranelagh, ” says one woman. “If it was I can guarantee the gardaí would be flooded in to deal with it. Places like Ballyfermot are forgotten.”

Brendan Cummins, youth worker in the Famlibase centre, is unsurprised at the surge. “There has been an increase in anti-social behaviour generally since the lockdown.”

Famlibase helps 300 children and young people and nearly 40 families affected by addiction, domestic violence, trauma, neglect and poverty. “We have seen a big increase in need,” he says.

Noting an increase in drug use and domestic violence, he says the number of child protection reports in the first six months of the year is already higher than for all of 2019.

Some children who would have been fed in schools and at after-school programmes pre-Covid did not get enough food when the schools were shut, he says. Some lost contact with the “one good adult” in their lives – whether a teacher or a youth worker, leaving them with “only their peers and friends to raise each other”, he warns.

Sitting in Famlibase, Seán Redmond agrees, saying Ballyfermot has been a “bad spot” during lockdownand he notes the closure of many local youth services.

“There’s been nothing to do . . . they’re [youth services] all closed. People are all in on top of each other . . . there’s tension,” says Redmond.

Calling for more gardaí on the ground, especially after 7pm, and funding for youth services, Cummins says he would keep Famlibase open “up to 10pm if he could. It could make a big difference.”

Mills worries about Halloween. In recent years Dublin City Council staged safely run bonfire and fireworks, but these are cancelled this year. Young people will “likely” organise their own this year, he says.

Following his injury Redmond has changed his mind about fireworks, describing them now as “ stupid”. But he understands why many of his peers continue to like them.

“They like the noise . . . the lights and colours; it’s just something to do. Yeah, we’re told by parents, the gardaí, in school [that] they’re dangerous. But it doesn’t feel like that when you’re using them. Not all fireworks are dodgy. It’s just one or two, so you take your chances. You’re only going to realise the damage when it happens to you,” he says.