Cork: Families call on city council to install CCTV at graveyard after vandalism

Relatives told they must pay for grave repairs at Kilcully, with bill estimated at €16,000 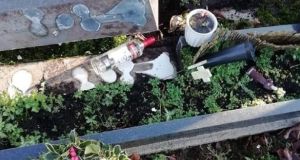 Families who have seen the graves of their loved ones vandalised in a Cork graveyard have called on Cork City Council to install CCTV cameras in the cemetery as a matter of urgency.

Around 100 people, with family members buried at St Catherine’s Cemetery in Kilcully on the northern outskirts of Cork city, made the call at a public meeting on Saturday, organised to address the recent spate of vandalism at the cemetery.

According to Cork City Council, five headstones were knocked over and items on another 14 graves were damaged at the start of the month, resulting in damage totalling an estimated €16,000.

At the meeting organised by the newly formed Friends of Catherine’s Cemetery, Cork city councillors told relatives that Cork City Council officials had made it clear that they would not be footing the repair bill for the damage.

Sinn Féin Councillor Thomas Gould told the meeting that he had raised the issue with council officials, who informed him that responsibility for maintenance and repair of graves in any Cork city graveyard lay with the families.

Local councillors have pledged to contribute €500 each to cover the repair bill, and have agreed to seek a suspension of standing orders at Cork City Council when they meet on Monday evening to press for improved security.

Several people at the meeting criticised the council’s position, with some saying it was hypocritical of them to say that they had no responsibility for the upkeep of graves, while also dictating to families on what they can put on graves.

TJ Hogan pointed out that Cork City Council determined what size headstones families can erect on graves and what they can put on graves, but will not accept responsibility for any damage.

Veronica Cahill, whose father Martin is buried in St Catherine’s, said the committee should seek its own independent legal advice on whether the council was liable for failing to provide proper security at the cemetery.

Meeting organiser Laura Carey said that she was very pleased with the large attendance and she welcomed city councillors present agreeing to push for the installation of CCTV footage to cover the interior of the graveyard.

“We’ve set up a committee to liaise with Cork City Council and the focus now is to get CCTV footage installed and have security there, as well as helping the families who have been affected by the vandalism,” she said.

Campaigner for the elderly Paddy O’Brien, whose wife Pat is buried at St Catherine’s, said the upset went beyond the families whose graves were damaged and extended to anyone with relatives buried in St Catherine’s.

“The top priority has to be security and ensuring there is no repeat of the heartbreak that this vandalism has caused.”