Where to now after the debacle over the RIC/DMP commemoration? 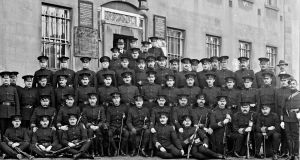 Members of the Royal Irish Constabulary (RIC) in Waterford in 1917. Minister for Justice Charlie Flanagan was forced to postpone a commemoration for the RIC and the Dublin Metropolitan Police. Photograph: A. H. Poole Collection

Before a decade of commemorations began in 2012 of the years around the creation of the State, then taoiseach Enda Kenny was only too well aware that it could exacerbate tensions and revive ancestral hatreds.

In a bid to ensure that pitfalls could be avoided and consensus created, the government set up an expert advisory group under the chairmanship of the chancellor of the National University of Ireland Dr Maurice Manning.

Given that North’s Stormont Assembly and Executive and the Belfast Agreement institutions were then working reasonably well, the government believed that any commemorations should use the Northern peace process as a frame of reference.

However, the experts refused “point blank”, arguing that a sanitised, whitewashed version of Irish history should not be presented for fear of causing offence.

“We were into commemoration. We were into history. We were not into politics. We said no,” Manning said in 2016.

The system worked well for years: the 1916 commemorations drew huge crowds and moderate debate, prompting an interest amongst new generations in the events that led to the foundation of the State and the role of Irishmen in the first World War.

However, the Government’s attempts to keep contemporary politics out of the commemorations imploded this week where Minister for Justice Charlie Flanagan was forced to postpone a proposed commemoration for the Royal Irish Constabulary (RIC) and the Dublin Metropolitan Police (DMP).

The recriminations have been ugly and have left nobody happy. Many people were outraged that the service would have remembered those who served in the Black and Tans and the Auxiliaries since their dead are included in the toll of 555 killed during those years even if they were not the primary focus of those behind the plan.

Taoiseach Leo Varadkar says the Opposition has done nothing to hasten the day of a united Ireland, while Fianna Fáil has accused him of ignoring the cross-party consensus on commemorations that was carefully built up over years.

Meanwhile, unionists, some of them gleefully, have complained that the affair has illustrated that anti-British sentiment in the Republic still runs deep.

Mr Flanagan has been taken aback by the “nastiness and vitriol” that his proposal generated.

In its guidance for the second half of the Decade of Centenaries (2018-2023), the expert advisory group recommended that the State should ration itself to a small number of key centenaries and leave the rest to local commemoration groups.

This was vindicated by the Soloheadbeg commemoration in January 2019, which by common consent was respectfully handled by local people. It saw relatives of the ambushers mingle with relatives of the two RIC men shot dead in the opening action of the War of Independence.

The State events as proposed are one for the War of Independence truce (July 11th, 1921); one for the Civil War, two for the coming into being of the State (January 1922 and December 1922) and one for when Ireland joined the League of Nations in September 1923, which will end the Decade of Centenaries.

The Government has added another to the list. There will be a State ceremony to remember Cork’s involvement in the War of Independence around the centenary of the death of the city’s lord mayor Terence MacSwiney in the autumn.

This week’s unseemly row does not auger well for the years ahead. There will be many difficult commemorations which will test people’s tolerance and respect for differences.

DUP leader Arlene Foster has already stated that she wants 2021 to be a celebration year, declaring that Northern Ireland has “endured” and “succeeded”.

Sinn Féin president Mary Lou McDonald has said republicans will have no part in any attempt to celebrate the anniversary.

Northern historian Dr Eamon Phoenix, a member of the Government’s advisory group, said the Decade of Centenaries had been well handled to date in the North, with many cross-community events in 2016 to mark the Easter Rising and the Battle of the Somme.

That was when there was an executive in place. “From this year down to 2022, opinion is bitterly divided. The RIC commemoration shows the kind of problems that lie ahead. As somebody involved in public history north of the Border, we have achieved quite a bit. The big challenge is in a way about the birth of partition.”

He suggested that both communities could coalesce around the centenary of King George V’s speech at the opening of the Northern Ireland parliament (June 22nd, 1921) in which he stated: “I appeal to all Irishmen to pause, to stretch out the hand of forbearance and conciliation, to forgive and to forget, and to join in making for the land which they love a new era of peace, contentment and goodwill.”

The next potential landmine for whatever Irish government is in power is a proposal for a State commemoration for the Truce (July 11th, 1921) which ended the War of Independence.

The advisory group has recommended a “formal commemoration for all of those who lost their lives during the War of Independence”.

There are many people who will object to any attempt to morally equate those who died fighting for Irish freedom with those who opposed it.

Will this be an Irish-only commemoration or will the British be involved? Where will it be hosted? What format will it take?

The Civil War commemoration will be another one that will need careful handling when that centenary rolls around in June 1922. The advisory group has recommended that the approach should be a “reflective and a reconciliatory tone that recognises that neither side has the monopoly on either atrocity or virtue”.

The group has advised that just one State ceremony should take place to remember those who died in the Civil War. The rest should be left up to individual communities.

Fianna Fáil TD Éamon Ó Cuív, the grandson of Eamon de Valera, said he grew up in a household where the sincerity on both sides of the Civil War was respected. As a member of the all-party group on commemorations, he says wide consultation will be critical in the years ahead.

“The biggest lesson that we can learn out of this for the next four years is start your discussions early, be sensitive to the nuances of situations, and don’t go ahead until you have got all reasonable opinions on board.”

He believes the personal tragedy of those who died opposing Irish independence should be recognised, but there is a “fundamental difference” between commemorating individuals and commemorating organisations opposed to independence.

“There is no hierarchy of victims but there is a hierarchy of causes, and the cause of Irish independence and protecting and defending Dáil Éireann set up by the Irish people by democratic choice was a noble cause from where I come from, and is something that I believe should be positively commemorated.”

This is not the first time there has been a rumpus over commemorations. The Easter Rising commemorations began with the debacle over a promotional video which featured none of those involved in 1916, and was famously dismissed by Prof Diarmaid Ferriter as “a historical shit”.

The video was reshot, lessons were learned, and, by common consent, the 1916 commemorations went well.

If the coming years go as well, few will remember what happened this week.