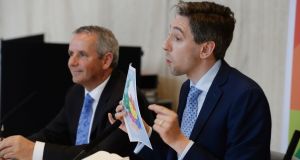 HSE CEO Paul Reid and Minister for Health Simon Harris. Mr Reid said that proposals for a voluntary leaving programme in the HSE would be ready by April. Photograph: Alan Betson/The Irish Times

The health service is appointing the equivalent of two additional managers every week at a time of recruitment restrictions elsewhere in the health service, new official figures show.

Fianna Fáil health spokesman Stephen Donnelly said this represented an increase of 51 on the number of managers employed in the health service at the end of June.

“So, while the current recruitment pause, which the Minister is denying is in place, is crippling the hospital network, the HSE is having no difficulty in recruiting managerial staff. It is incredible.

“New HSE director Paul Reid said in November that the agency had too many managers, and layoffs will begin in the New Year – I sincerely hope this will be the case.”

Mr Reid told The Irish Times on Friday that proposals for a voluntary leaving programme in the HSE would be ready by April.

“We’ve put a lot of controls in place. Some jobs that are highly specialised are being approved, a minor number of jobs approved at centre level. Our numbers are going up overall across the system; if you look at recruitment, up about 2,100 for the year, of that number the vast majority now focus on clinical medical care.

“We’re beginning to see the dial turned where we want it much stronger.”

In a written reply to a parliamentary question, the HSE said that as of the end of November there were 137,737 personnel (or 119,532 whole-time equivalents) directly employed in the provision of health and social care services by the HSE and the various voluntary State-funded bodies known as Section 38 organisations.

No hospital can operate without a manager to look after budgets, staff and buildings

“These staff and services need to be administered and managed and the large majority of management, clerical and administrative staff (84 per cent ) are employed in the front-facing services of hospital, ambulance, community health and wellbeing, screening, environmental health, primary care reimbursement etc, and the remainder in central areas such as finance, human resources, ICT (including eHealth, cancer control, clinical strategy etc) together with health business services (recruitment, estates, procurement and payroll etc).”

The HSE said frontline staff had to be supported by other services.

“For example, clerical support enables medical consultants operate more efficiently by scheduling care, diagnostics, appointments etc. No hospital can operate without a manager to look after budgets, staff and buildings. No public health department can prepare for emergencies or plan for a flu pandemic, nor can any of our services exist without recruitment or payroll.”

The HSE figures show there were 45 more personnel employed at general manager and grade VIII level in November than in June, with six additional staff classified as “other senior manager” grade.

There was one fewer assistant national director in November than in the previous June.

The Government has insisted that there is not a blanket recruitment moratorium in place and that more than 2,000 staff were taken on last year. However, nurses have strongly criticised restrictions in place for taking on additional personnel.