Increase in referrals for testing since schools reopened 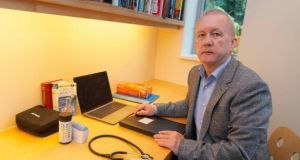 Dr John Sheehan: ‘We got a big bump about ten days ago when the first schools starting going back and then it quietened but the last few days we’ve seen a bit of an increase.’

Doctors in Cork have noticed a major surge in the number of people presenting for Covid-19 testing since the re-opening of schools but say that the incidence of the disease continues to remain low even though that could change over the coming days and weeks.

Several GPs contacted by The Irish Times in Cork city and county reported a similar pattern of increased numbers of people contacting their clinics concerned about Covid-19 with many parents worried about their children contracting the disease since returning to school.

Former Lord Mayor of Cork, Dr John Sheehan, who is in practice at Blackpool Bridge Surgery in the heart of Cork’s northside, said that he noticed a significant jump in the number of people presenting with concerns about Covid-19 in the past fortnight since schools re-opened.

“We got a big bump about ten days ago when the first schools starting going back and then it quietened but the last few days we’ve seen a bit of an increase with people calling but that was probably to be expected because schools are back two weeks or so at this stage.”

Dr Sheehan said the practice is currently sending approximately five to seven people a day for Covid-19 tests which is more or less on a par with the numbers it was sending in March and April even though the criteria for testing then was higher with only those with three symptoms being tested.

“It’s mainly younger people, I don’t know if I have referred any older person in the last week or so, it’s been a mixture of schoolchildren and young working people in their 20s – they are the two groups we have been sending for testing to the centre near us here on the Old Mallow Road.

“The turnaround time for tests has been good – it’s consistently around 48 hours which is very good but that may change if the numbers go up but we haven’t had any positive tests in the last week or two which is great so we’ve been lucky so far but I expect that is going to change.”

Dr Mike Thompson of the Imokilly Medical Centre based in Midleton in East Cork also reported an increase in the number of people that he has referred for Covid-19 tests in the last three weeks, again co-inciding with the re-opening of schools.

“We were very quiet until late July but our referrals are going up – we are testing huge numbers – I’m sending ten people a day for testing and I would say many GPs around here are reporting the same – it’s since schools re-opened – some we are seeing and some we have been referring over the phone.

“It’s less than we were sending back in March and April when we were sending 30 a day for testing and many of these cases now are not particularly unwell children but people are being vigilant and just being responsible but I’ve only had two positives in three weeks which is good.”

Dr John O’Riordan of the Sullane Family Practice in Macroom in Mid-Cork similarly reported a surge in the number of people presenting with concerns about Covid-19 though in his experience, the numbers now are greater than they were in March and April.

“The last three weeks have been a lot busier – we’ve been referring a lot more people for testing, especially since the schools went back but as regards the incidence of Covid, I’m not seeing a huge number of positive tests – we have had only one positive case,” he said.

“At the moment, we might be referring 15 or 20 a day for tests – it depends on the day – Monday is very busy day after the weekend and most of our early morning calls are Covid-related – parents ringing in ‘My child has a temperature overnight, does he or she need to be tested?’

“I think it’s still a broad church in terms of those contacting us – mainly school going children with fevers or an adult with a cough – it’s definitely the last three weeks, it was like a switch was flicked when the schools went back and you definitely get the impression we are on the brink of something.

“Whether that happens of course depends on how people react but I think compared to where we were in March, it’s a different country to what we experienced during the lock down, a lot more people out and about and a lot more traffic and it’s about trying to get that balance right.”