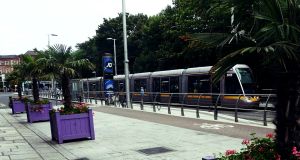 Minister of State Pippa Hackett said, ‘the NTA will commission analysis of other potential metro routes in Dublin, such as a metro to the south east or to the south west.’ Photograph: iStock

A proposal to have an underground “loop” at St Stephen’s Green in Dublin to link the MetroLink rail project to the Luas is one of the potential options being considered as part of a review of the national transport strategy.

Minister of State Pippa Hackett said there was a need to “review and refresh” the transport strategy, “to ensure it is kept up to date and informed by latest developments”.

Ms Hackett, who is a Senator, said by law the strategy must be reviewed every six years and the National Transport Authority has begun work on this and will launch a public consultation next year.

Ms Hackett said the NTA will “commission analysis of other potential metro routes in Dublin, such as a metro to the south east or to the south west, and establish a refreshed evidence base to underpin transport planning in the region”. They will be published as part of consultations on the broader strategy.

Ms Hackett told Independent Senator Michael McDowell that the preferred route for the metro system is to link the estuary in north County Dublin with Charlemont on the Grand Canal.

She said that “the project will be future-proofed so that a connection between the MetroLink and the Luas green line can be provided in the future”.

But she said “we still must tackle capacity on the Luas green line”.

MetroLink is a proposed high-capacity, high-frequency 19km rail line to run from Swords in north county Dublin to Charlemont.

It would link Dublin Airport, Iarnród Éireann, Dart, Dublin Bus and Luas services and much of it would run underground.

Mr McDowell raised concerns about the proposed route for the metro system, spending on which “has already cost a staggering total of €170 million”.

The former tánaiste pointed out that during the last general election campaign Eamon Ryan, now Minister for Transport, “campaigned extensively on the proposition that he did not want to end the Luas green line at Charlemont as is proposed by the MetroLink people, but that he wanted to afford different parts of Dublin the advantage of being the southern end of the MetroLink project to Dublin Airport”.

But he said it now seemed the plan was proceeding apace.

“They are drilling and taking samples of earth in Ely Place, Ranelagh and places like that. They are proceeding as if there were no real option open but to proceed with the proposal they have themselves.”

Ms Hackett said said a number of options were being looked at including the possibility of the loop or turn-back facility in St Stephen’s Green.