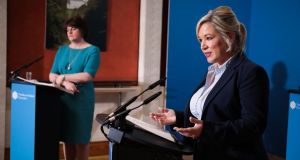 Pandemic dilemmas have merely blurred the incoherence of the five-party Stormont Executive. The alarming uptick in Covid-19 outbreaks, after Northern Ireland’s cheering early record, gives figureheads Arlene Foster and Michelle O’Neill another chance to show unity, a tiring public willing them on. Now hospital outbreaks and the imminent problems of Brexit heighten tensions.

The DUP and Sinn Féin are grabbers not sharers in the oddest of forced coalitions, and arrogant towards smaller parties. Ministers seen as doing their best, the SDLP’s Nichola Mallon in Infrastructure and Alliance’s Naomi Long in Justice, regularly complain the only notice they get of agendas for Executive meetings comes from the media or consultants.

DUP/SF mutual distaste is balanced by a shared desire to maintain their Stormont forum and dominance in their respective communities. The RHI scandal and its damage to Foster eroded most of that stability. She claims that the media invents a divide between herself and arch-Brexiteer MP Sammy Wilson and insists her party esteems her leadership. Few believe her. Sinn Féin’s arrogance in staging the Bobby Storey funeral holed Michelle O’Neill’s standing on social distancing, her inability to apologise increasing the offence. She and Foster ended their stand-off on joint appearances with choreographed O’Neill “regret”, and low-key Foster acknowledgement.

Health minister Robin Swann, the sole Ulster Unionist minister, is seen as the person handling the crisis. Though he won initial public sympathy because the other parties ducked the job, Swann’s dour directness gained stature in the absence of joint First/Deputy First briefings. His responses to Van Morrison’s contribution on Covid-19 hit a lighter note. Better Sir Van should sing Northern Ireland “from the dark side of the street to the Bright Side of the Road”, he said. In the unlikely pages of Rolling Stone, the minister wrote of “real disappointment” at hearing Morrison appeal to the “tin hat brigade”.

Swann has sounded comparatively steady despite the strain between Foster’s need to acknowledge the Johnson government path, however vacillating, and O’Neill’s reiteration that Ireland is an island and cross-border collaboration is vital.

But political status may be almost as unpredictable as the course of Covid, and as dependent on events. The health minister inherited a system with the longest waiting times in the UK, under-staffing, and long overdue reorganisation of hospitals in the teeth of local resistance to change. There is a tail of neglected referrals, interrupted cancer and other treatments, on top of the virus demands. If Covid eventually retreats to a lasting manageable level, Swann may struggle to retain the admiration largely won by his steadiness in a flailing Executive.