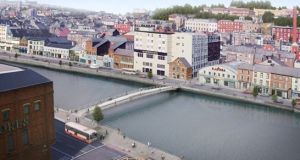 The council has estimated that the bridge will see up to 3.9 million users a year and result in a cutting of journey times of 1.8 minutes per day which will equate to savings of €11.20 per hour

Cork City councillors will choose the name of the latest bridge to be constructed across the River Lee on Monday with a leading Irish-American trade unionist, an Irishwoman who saved hundreds of Jewish children from the Nazis and the inspiration behind Irish ballet among the nominees.

The €5 million pedestrian bridge links St Patrick’s Quay from opposite Harley Street to Merchant’s Quay across the north channel of the River Lee.

All five nominees have strong Cork connections. Shandon born, Mary Harris who left Cork in the 1840s as a child, went on to become one of the greatest proponent of workers and children’s rights in the US as the trade union organizer, Mother Jones.

Mary Elmes, born in Cork in 1908, moved to France in 1942, where she rescued Jewish children facing deportation to the concentration camps, earning her the title the Irish Oskar Schindler.

Members of the public also suggested Joan Denise Moriarty, who grew up in England of Irish parentage and set up the Cork Ballet Company in 1947 and the Irish Theatre Ballet in 1964.

The final two nominees have strong connections with Ireland’s fight for freedom. Cumann na mBan member, Leslie Price de Barra acted as a courier in the GPO in the 1916 Easter Rising and later becoming president of the Irish Red Cross.

Donnchadh de Barra from Riverstick played hurling with Cork but was better known as a leading figure in the republican movement. He died on hunger strike in 1923.

Councillors will identify their preferred nomination from the five with the two nominees with the highest level of support being voted on again.

According to Cork City Council, it’s expected the bridge, when fully operational following its official opening in May, will carry up to 11,000 pedestrians and cyclists daily between the Victorian Quarter, comprising MacCurtain Street and surrounding areas, and the city centre.

The council has estimated that the bridge will see up to 3.9 million users a year and result in a cutting of journey times of 1.8 minutes per day which will equate to savings of €11.20 per hour in journey times for recreation and work and will add over €800,000 a year to the local economy.

The bridge, which has been designed by ARUP & Wilkinson Eyre Architects and fabricated off-site by engineering firm, Thompsons of Carlow, will be placed on a barge in Cork Harbour and shipped up river to the city centre where it will be lifted by crane from the barge into place in one overnight operation.

The barge journey will be timed to coincide with the optimum tide level for clear passage under Brian Boru Bridge and the installation will involve the closure of both Merchant’s Quay and St Patrick’s Quay during the operation which is scheduled to take place in April.