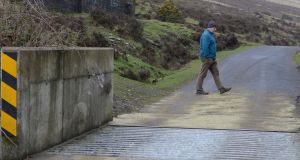 The scene near the Nine Stones scenic area in Borris, Co Carlow where a car crashed in the early hours of Sunday morning. Photograph: Alan Betson/The Irish Times

A 16-year-old boy has been killed and another is in a critical condition following a crash in Co Carlow in the early hours of Sunday morning.

The incident occurred near The Nine Stones, Mount Leinster, Borris at about 5am, a Garda spokesman said.

Three other teenagers were hospitalised after the crash. The driver was fatally injured when the car struck a wall.

He was pronounced dead at the scene and his body has been taken to Waterford hospital. He has been named locally as Eamon Kavanagh, from Myshall, Co Carlow.

“The four other male occupants of the car, all late teens, were taken to St Luke’s Hospital and Waterford University Hospital, one believed to be in a serious condition,” the spokesman added.

Gardaí later confirmed that one person was in the Mater hospital in Dublin in a critical condition.

“I’m sure at this stage the family are devastated and all they want is some privacy to try to come to terms with this tragedy,” Fine Gael councillor Tommy Kinsella told RTE.

The road was closed to facilitate an examination by Garda forensic collision investigators and local diversions were in place early on Sunday morning.

However, the crash scene was cleared by lunchtime.

The location of the crash is a scenic road at the side of Mount Leinster.

One local councillor who was returning from Dublin at about 12.30am said conditions in the area were foggy at that time and that visibility was very poor.