Martin defends confidence and supply at ardfheis – and writes its obituary 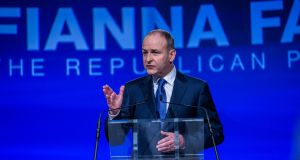 When party conferences are successful a central message or phrase emerges that lingers in the memory, for the short term at least.

In 2016 at the Fianna Fáil ardfheis Micheál Martin came up with a memorable line that Fine Gael wanted “a coronation not an election”.It set the tone for the party’s approach to the general election the following month.

Three years later it was much harder to summarise the take-home thought from this year’s ardfheis. If you wanted to make a fist of it, it went something like this: What do we want? A general election. When do we want it? Erm, well, sometime in the middle distance, but not too soon.

The decision last December (which, by all accounts, was unilateral) by Martin to extend the confidence and supply side with Fine Gael for another year was the only real talking point of the one-day conference in Citywest, Dublin.

When it was brokered in the summer of 2016, the idea had a sense of “new politics” about it, and seemed to have a lot of potential. The two big parties might have stumbled on the formula that could defend the centre and also defend their own interests. Fianna Fáil could still be the main opposition party, but give strategic support “in the national interest”. This was a third way to keep the incipient threat of Sinn Féin and others at bay into perpetuity.

Over the last year it has been fraying, and the fault lines were exposed during the recent controversies over the costs of the national children’s hospital and the nurses’ strike. There were Fianna Fáil TDs lambasting the Government in public in the morning, while abstaining when the crucial confidence vote in Simon Harris came before the Dáil.

The internal mutterings in Fianna Fáil in recent weeks translated into open criticism of the deal.

Has the party’s adherence to the deal had an impact on it electorally? Paradoxically, there is little evidence of that so far. The two big parties do seem to be in slightly better fettle than their rivals, if opinion poll evidence is to be believed.

But confidence and supply has had its day. A mark of how seriously this issue is now taken by the party is that Martin devoted the first half of his leader’s speech to a defence of its extension.

And, of course, the pretext was Brexit. Martin said it posed such an historic and urgent threat to Ireland that it could not be tackled with “politics as usual”. Fianna Fáil needed to put the national interest first.

He also said pulling the Government down at this stage would have calamitous consequences.

Nobody liked it [the deal], he said, before continuing: “We refuse to expose our country to the massive risk of having no functioning government or Dáil at this moment of great threat.”

He said that if an election were called it would take at least four months to form a new government. “Nobody who genuinely has Ireland’s interests at heart could tolerate this.”

The next election is unlikely to yield a clear winner. If Fianna Fáil manages to edge ahead of Fine Gael, the message is it won’t use the same formula to form a government. But then when you start looking at the alternatives, none of them give you a favourable roll of the dice.

Coalition with Sinn Féin? Ruled out. A coalition cobbled with a patchwork of Independents and smaller parties? Very messy, and it would still not achieve a majority.

All of these suggest months of negotiation followed by a general election that might deliver a more decisive result.

This had the feel of a mid-term conference even though an election is less than a year away. The alliance with SDLP is now in place, but it is tentative policy cooperation and sharing rather than a formal merger. Still, SDLP leader Colum Eastwood did get high approval from delegates, especially with his reworking of the Donald Tusk line on hell, this time directed at Sinn Féin.

The only clear bellicose moment was when Martin signalled its biggest policy clash with Fine Gael for the next election – income tax.

“When faced with 3,500 homeless children, the Taoiseach went to his ardfheis and announced an unaffordable €3 billion tax cut weighted to the highest earners. That tells us all we need to know about his priorities,” said a delegate.

There was not much else in terms of distinction. Fianna Fáil’s emphasis in housing is on affordability; it also puts great store in the National Treatment Purchase Fund, which it has championed since its inception.

In any instance, while confidence and supply still lives, Martin has now written its obituary.