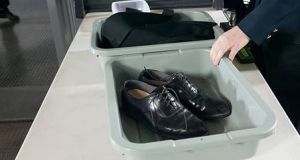 A spokesman for the Revenue Commissioners said the recruitment effort was ongoing, and individuals from the 3,030 who applied were still being drawn down for posts from panels. Photograph: Getty Images

Less than half of the customs officers planned to be hired to fill extra Brexit posts are in place ahead of the UK’s departure from the EU next month.

Last July the Government said it was planning to staff an extra 700 customs to ports and airports, as well as hiring 300 extra veterinary inspectors. Some 270 Brexit customs positions would be filled through an open recruitment process.

However, figures from the Revenue Commissioners show despite 3,030 applications under the recruitment process, just 77 new customs officials had been hired by the end of last month.

Figures up to February 22nd show 117 customs officers have been hired as part of the recruitment campaign.

The recruitment figures were released to The Irish Times following requests under the Freedom of Information Act.

A spokesman for the Revenue Commissioners said the recruitment effort was ongoing, and individuals from the 3,030 who applied were still being drawn down for posts from panels.

The figures do not include an extra 130 staff that were redeployed to customs positions in preparation for Brexit from other departments or appointed following internal competitions.

These staff bring the total number of additional customs officials hired in preparation for Brexit to more than 250.

Revenue is “on track” to have recruited over 400 extra staff by the end of March, the spokesman said. Revenue has also hired extra staff to fill vacancies where officials had been redeployed to Brexit-related roles.

Separately, only a quarter of Irish businesses that trade with the UK have registered for custom numbers with Revenue, a requirement to trade with non-EU countries.

In recent weeks Revenue has written to over 70,000 businesses that trade with the UK, advising them of the need to register, if they wish to continue trading with Britain post-Brexit.

Minister for Business, Enterprise and Innovation, Heather Humphreys called on firms to avoid putting off the registration process, which can be done online.

“So far around one in four businesses in Ireland that trade with the UK have registered with Revenue. With just five weeks to go to Brexit, I am strongly urging the remaining three-quarters or so of firms to sign up,” she said.

“Be they a local retailer who buys their fresh and frozen goods from a UK supplier, or a restaurant owner who sources key ingredients from the UK, they will need their number to protect their business from delays and other Brexit impacts,” Ms Humphreys said.

On Monday Ms Humphreys will announce a series of free one-day customs training sessions, that businesses can avail of at local enterprise offices across the country.