Many schools struggling to hire teachers in subjects such as maths, science and languages 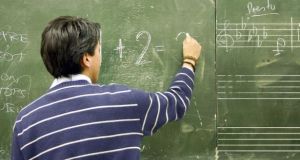 Secondary schools will be able to jointly-hire teachers for the first time under a new plan aimed at easing shortages in key subjects such as maths, science and languages.

Minister for Education Joe McHugh will announce on Monday that a new teacher-sharing scheme will come into force, ahead of the coming school year.

The initiative will allow two schools to work together to recruit a teacher in a “priority” subject for a job and employ them on more hours than if they were teaching in just one school.

The scheme will start from the beginning of the 2019/20 school year and will be reviewed after the first year of operation.

While there are plenty of qualified teachers in subjects such as English and history, schools report acute difficulties finding staff for certain subjects, in particular physics, Irish, maths, European languages and home economics.

In a statement, Mr McHugh said teacher sharing will optimise use of teaching time and allow a teacher to teach as many hours as possible in a high-demand subject.

“It is a good option for the schools and for the teacher,” Mr McHugh said. “I am confident that it will make a difference and help to ease the difficulties that some schools have experienced in sourcing teachers of high-priority subjects.”

Education observers say a number of factors are behind teacher shortages in key subjects, including newly-qualified graduates being hired into better-paid industry jobs; low numbers of teaching hours in individual schools, especially in subjects such as physics; and competition from international recruitment firms for schools based abroad.

A demographic bulge at second level over the coming years, along with the addition of new subjects such as computer science and additional foreign languages, is likely to add to shortages, according to school management bodies.

“Principals and the boards of management in schools should seize this opportunity to work with a neighbouring school by sharing a teacher in a specialist subject,” he said.

“With all the progress in our post-primary education system, the growing number of young people in post-primary and new initiatives like Leaving Cert PE and computer science, we need to focus on new ways of working.

“I urge schools to see this as an opportunity and begin the groundwork to make the most of this new scheme.”

The teacher-sharing initiative is one of a number of actions contained in the Department of Education’s action plan for teacher supply, published last November.

The development and implementation of the plan is led by a teacher supply steering group, chaired by the department’s secretary general Seán Ó Foghlú.

Among other steps taken in recent times include additional places on teacher education programmes in priority subjects, along with financial support for trainee teachers completing post-graduate courses.

There has also been a national advertising campaign – called “teaching transforms” – to promote the teaching profession.

Mr McHugh said that while teacher supply was a complex challenge, the sector will only succeed in addressing the challenges if “we continue to work together and seek to identify and implement flexible and innovative approaches” to ensure future needs of schools, teachers and children is met.