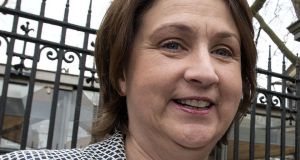 The Government’s affordable childcare scheme has cut the cost of care by just 4 per cent of parents’ income, according to Fianna Fáil’s spokeswoman on children.

Anne Rabbitte told some 300 delegates at the party’s ardfheis that childcare now sets parents back an average of €622 month.

For a couple with two children, their childcare costs have dropped from 27 per cent of their income to 23 per cent under the Government scheme, she said.

The Galway East TD was speaking during a wide-ranging debate on topics including health, education, childcare and climate change.

A local election candidate told the ardfheis that the National Transport Authority (NTA) had bought 150 diesel buses just months before the deadline the Government set to end the purchase of diesel-run buses.

But the NTA bought 150 of them just months before the July deadline and these vehicles will be in operation for another 12 years.

Ms Buckley, a former Fianna Fáil press director, said this action demonstrated the weakness of the Government’s commitment to meeting its climate change targets and how poorly Ireland compares with other EU cities for carbon friendly transport, including Paris which already has 60 electrically-powered buses in operation.

The State will also fail to meet its 2020 target to have 50,000 electric cars and is likely to only hit 20 per cent of that total.

The ardfheis was also told the Government had not yet begun the promised review of its design and build policy on school buildings in the wake of the controversy last summer over structural defects in a number of schools.

Ardee local elections candidate John Sheridan said the terms of reference had not even been set for the review and there was no indication of a deadline and this was “absolutely unacceptable”. Structural investigations at 42 schools are continuing and precautionary measures are needed at 22 schools.

Party health spokesman Stephen Donnelly told the conference that Irish patients wait longer to see a consultant and longer to get treatment than in any other country in Europe.

He said this Government “chooses to spend more on healthcare than anywhere else on Earth but is not managing that money” effectively.

Referring to the controversy over costs at the national children’s hospital, Mr Donnelly said “people are furious about the overspend”.

But “we will be spending four times more for a bed than the children’s hospital in Liverpool and yet the Government’s view is that €1.7 billion is a reasonable cost”.