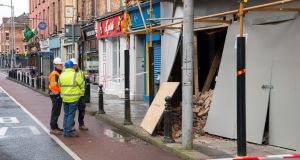 City Council engineers pictured on Washington Street in Cork city which closed off amid concerns about the structure of a building, following a partial collapse overnight. Photograph: Daragh Mc Sweeney/Provision

Cork City Council has been urged to carry out an immediate audit of all buildings in the city centre following the partial collapse of a four storey building on one of the city’s busiest streets early this morning.

Green Party Cllr Dan Boyle said the partial collapse of the building on Washington Street was particularly worrying as it was a busy thoroughfare both by day and night and it was fortunate no one was injured in the incident.

The ground and first floor frontage of No 38/No 39 Washington Street, which was vacant and which was undergoing refurbishment, collapsed on to the street around 2am this morning.

The scene of the collapse is less than 50 yards away from where student Aoife Bell (21) from Kerry Pike in Cork was killed when a building collapsed on to pavement on Christmas Eve 1999.

Cllr Boyle said the council needs to carry out an assessment of the structural integrity of buildings in the city centre as this is the fourth significant incident of collapse within the last year.

Crews from Anglesea Street, Ballyvolane and a Third Officer are currently in attendance at a partial building collapse on Washington Street in the City Centre.

Avoid the area, road is closed off to public access. #CorkTraffic pic.twitter.com/kg53lD2t0y

Last June, the front of a building on nearby North Main Street collapsed while last September, a woman suffered minor injuries when masonry fell from the Moderne on Patrick Street, and last month, a wall collapsed on Roman Street.

“I and others have called for an audit of all buildings in the city centre in terms of assessing their structural integrity but certainly given the number of incidents, I don’t think it can be avoided any longer,” he said.

Cllr Boyle said the greatest problems seemed to be in the North Main Street/South Main Street/Washington Street area where many buildings date from the early 19th century and are only occupied on the ground floor.

“You are talking about similar type buildings – four storeys high and where the risk has come about is that it’s only the ground floor that is in use of many cases so the lack of use of the upstairs floors has made these buildings a risk.”

Cllr Boyle said one solution would be to get people living and working in these upstairs floors again to ensure the buildings are safe but that could require changes to building regulations regarding fire and emergency exits.

He said the council had tried to promote the idea of city centre living with people living over shops but it required the property owners to put in separate entrances so residents had a separate exit in the event of a fire.

“So we need to look at our building regs as well as do an audit of all buildings to ensure these buildings are in use and once in use, we can reduce the risk of further collapses.”

The council a building alongside the partially collapsed building on Washington Street, had been evacuated and its building control engineers were currently on site assessing the stability and safety of the building.