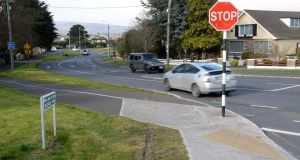 Tyre marks on the path where a woman was killed after being hit by a car in Killiney following robbery of shop nearby. Photograph: Dara Mac Dónaill/The Irish Times

A woman out walking in south Dublin on Tuesday has died after being struck by a car speeding away from the scene of a robbery.

The woman has been named as Jacqueline McGovern, a special needs assistant who worked at Our Lady of Good Counsel girls’ national school.

Ms McGovern (54) was taken to hospital in a critical condition after being hit by the vehicle in Killiney shortly after 9.20pm on Tuesday.

A woman (51) who was walking with her was also struck by the same car. She was also taken to St Vincent’s hospital, where she is being treated for minor injuries.

The 51-year-old woman was reported to be another special needs assistant.

Gardaí are appealing for witnesses to the incident and are appealing in particular to those with camera footage, including dash cam, who were in the area between 9pm and 9.30pm to make it available to them.

The crash happened shortly after a Centra convenience store on Barnhill Road in Dalkey was robbed by a number of males. It is understood they threatened members of staff in the store before making off with a sum of cash in the getaway vehicle.

Gardaí­ said no one was physically harmed during the raid.

A short time later, the car hit the two female pedestrians when it mounted a footpath a short distance from the Graduate roundabout on Rochestown Avenue, just more than 1km from the scene of the robbery

A search for the raiders is under way after they abandoned the car at the roundabout and fled the area on foot.

Crime scenes are being preserved on both the Barnhill Road and the junction of Ballinclea Road and Avondale Road, and examinations are to be carried out by Garda forensic collision investigators and local scene-of-crime officers.

Anyone who can assist with the investigation is asked to contact Dún Laoghaire Garda station on 01-6665000 or the Garda Confidential Line on 1800-666111.

The head of Fórsa’s education division, Andy Pike, said on Wednesday: “Our hearts go out to Jacqueline’s family and friends, and to the students and colleagues in her school community. We also hope for a speedy recovery for her colleague, another SNA injured in the incident.”

A woman who lives on the Avondale Road described the incident as “terrifying”.

“You would generally have a lot of walkers and joggers out on the road and it would be quite safe. Nothing like this has ever happened here before.

“It’s terrifying to think you could just be out walking and something like that could happen. My sympathies are with the woman’s family.”

An older woman, who also lives in the area, said: “I heard a bit of a commotion on the road and thought there might have been some sort of accident. It was only this morning I heard what had happened.

“You would sometimes have cars speeding around but for two women to be hit like that and one of them dead, it’s absolutely shocking.”

Local councillor Barry Ward said the community was “shocked” and that the incident “wasn’t characteristic of the area”.

“You would have a lot of people who live in the area who walk along there. It’s a good wide footpath and it’s not an area that would be unsafe for pedestrians normally,” the Fine Gael councillor said.

“Obviously if cars are going to drive up onto the footpath, the width of the footpath doesn’t matter, it’s not going to protect them. People are just shocked. Obviously accidents happen but for something like this to happen, it’s shocking.”

“We are all thinking of the family of the deceased lady of our community & of her friend out walking together on a Tuesday evening,” the Dún Laoghaire TD wrote on social media.