Coronavirus: First death confirmed in Ireland as WHO declares a pandemic

The World Health Organisation (WHO) has declared a coronavirus pandemic as the first death of a person from coronavirus was confirmed in Ireland. 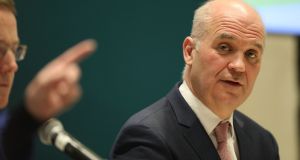 The World Health Organisation (WHO) has declared a coronavirus pandemic, warning that countries are not doing enough to stop the spread of the virus around the globe.

It comes as the first death of a person from coronavirus was confirmed in the Republic and the number of new cases has increased by 9 to 43, up from 34.

The death of of the patient, an elderly woman with an underlying health condition, occurred in Naas General Hospital, Co Kildare earlier on Wednesday, The Irish Times understands. The patient was a case of community-transmitted Covid-19 .

Community transmission means the person had no travel history for at-risk areas internationally and therefore must have acquired the disease locally.

It is understood the patient initally presented with respiratory symptoms and was later diagnosed with the disease when staff decided to perform a test as part of disease surveillance.

The criteria for testing patients has been broadened this week to include those patients who have clinical respiratory symptoms but no history of travel to affected areas internationally. This is in recognition that the disease may be ciculating in the community.

The new cases include four males from the south of the country associated with travel, one female and one male from the south who had contact with confirmed cases. It also includes three males from the east , two associated with travel and one with contact of a confirmed case. Chief medical officer Dr Tony Holohan said Ireland was now moving to enhancing its containment measures.

Meanwhile the WHO’s director general, Dr Tedros Adhanom Ghebreyesus, said “pandemic” was not a word to use carelessly or lightly, but 4,291 people had died and thousands more were fighting for for their lives in hospital.

“In the days and weeks ahead we expect to see the many cases, the many deaths and the number of affected countries climb even higher,” he said.

By reversing course and using the charged word “pandemic”, which it had previously shied away from, the UN health agency appeared to want to shock lethargic countries into pulling out all the stops.

“We have called every day for countries to take urgent and aggressive action. We have rung the alarm bell loud and clear,” Mr Ghebreyesus said. “We are deeply concerned by both alarming levels of spread and severity and by alarming levels of inaction.” He called on countries to stake urgent and aggressive action against the pandemic, insisting that the impact could still be controlled.

“All countries can still change the course of this pandemic. If countries detect, test, treat, isolate, trace and mobilise their people in the response,” he said.

We are entering a new phase in #Covid19. I fully support our hospitals who have to make decisions on restricting visitors based on clinical risk, patient and public safety. Please do as we urge and our ask will increase as we progress. @HSELive

The WHO added that Iran and Italy are the new front lines of the battle against the virus that started in China. “They’re suffering but I guarantee you other countries will be in that situation soon,” said Dr Mike Ryan, the WHO’s emergencies chief.

In Italy, prime minister Giuseppe Conte added new restrictions on Wednesday to the lockdown imposed to fight the coronavirus after figures showed Italy posting the highest daily increase in deaths of any country since the outbreak began. In a televised address to the nation, Mr Conte said all shops would be shuttered except supermarkets, food stores and chemists, and companies must close all their departments that are not essential to production.

Services such as hairdressers and beauty parlours will also be closed, along with all bars and restaurants.

Elsewhere Denmark announced it will close all schools and universities and will start sending home all employees in the public sector with non-critical jobs in the coming days to curb the spread of the coronavirus, the prime minister has said.

Denmark had 514 people diagnosed with the coronavirus as of Wednesday, rising 10-fold since Monday in what Health Minister Magnus Heunicke described as the “most dramatic increase seen in Europe”.

In Ireland, the criteria for testing patients has been broadened this week to include those patients who have clinical respiratory symptoms but no history of travel to affected areas internationally. This is in recognition that the disease may be ciculating in the community.

More than 2,300 people have been tested for the disease in Ireland so far, with the vast majority receiving negative results. Tests are being carried out at a rate of 330 a day, according to Dr Cillian de Gascun, head of the National Virus Reference Laboratory (NVRL). The average turnaround time for processing tests is 10 hours, he said.

The NVRL was the first facility in the state to carry out testing, but Cork University Hospital began doing this earlier this week and St James’s Hospital will do so in the coming days.

Labs in Waterford, Galway and Limerick will also start processing tests as part of the rollout of a national service, official said.

Asked about the World Health Organisation’s decision to declare the Covit-19 outbreak a pandemic, Dr Holohan said: “I don’t think Ireland is a country they have in mind when they make a statement like that.”

In a statement regarding the first death in Ireland, the HSE’s Health Protection Surveillance Centre said it had been informed that a patient diagnosed with Covid-19 in Ireland has “passed”.

It said it was the first recorded death relating to Covid-19 reported in Ireland.

Dr Holohan said: “I would like to extend my condolences to the family and friends of this patient.

“I urge the media and the public to respect their privacy at this difficult time.

“We continue our efforts to interrupt the transmission of this virus. It will take all of us, collectively to succeed. Please continue to follow public health advice.”

Elsewhere Minister for Foreign Affairs Simon Coveney said the travel advise in relation to Spain had changed and travellers were being advised to “exercise a high degree of caution”. He said the Department was “advising against non-essential travel to the following areas: Madrid, Vitoria & Labastida in the Basque Country and La Rioja.”

Meanwhile the Department of Health in Northern Ireland has confirmed two new positive tests for coronavirus bringing the total number of cases in the North to 18.

The department in a statement on Wednesday afternoon said that both cases were adults and both were secondary transmissions that can be traced to a previously reported case that involved recent travel to Northern Italy. The North’s Public Health Agency is currently undertaking contact tracing for both cases. In Northern Ireland there have been 246 concluded tests, of which 228 were negative, and 18 were positive.

On Wednesday Italy weighed imposing even tighter restrictions on daily life and announced billions of euros in financial relief to cushion economic shocks from the coronavirus. In Iran, by far the hardest-hit country in the Middle East, the senior vice-president and two other cabinet ministers were reported to have been diagnosed with Covid-19, the illness caused by the virus.

Iran reported another jump in deaths, by 62 to 354, behind only China and Italy. For most, the coronavirus causes only mild or moderate symptoms, such as fever and cough. But for a few, especially older adults and people with existing health problems, it can cause more severe illnesses, including pneumonia. More than 121,000 people have been infected worldwide. But the vast majority of people recover.

According to the WHO, people with mild illness recover in about two weeks, while those with more severe illness may take three to six weeks to recover. – Additional reporting Guardian News and Media