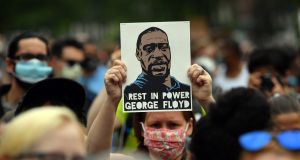 Cork City Council has opened a digital book of condolence for the people of Leeside to express their sympathies to the family of George Floyd who died in the course of being restrained by a police officer in the United States.

Green Party Cllr Dan Boyle said that the digital book, which can be found by going to “bit.ly/gfloydcork,” will be open from Thursday until close of business on Wednesday June 17th.

Responses will then be collected and sent to the US embassy in Dublin, for it to be passed along to the family of Mr Floyd, who died after a police officer knelt on his neck for several minutes while detaining him in Minneapolis on May 25th.

Cllr Boyle, who was born in Chicago, urged people to show solidarity with Mr Floyd’s family by signing the book, saying “what happened in the case of George Floyd, and in the case of too many before and since then, is abhorrent.

“Too many times something like this has happened, even just in recent memory. If we don’t stand against injustice like this, if you’re silent now – whether you’re in Cork or Kansas – then you’re standing with the injustice.”