Weddings, funerals with small groups to resume in Northern Ireland 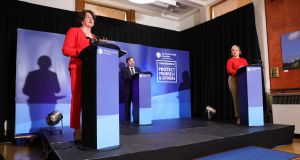 The Northern Executive has given the go-ahead for the easing of some coronavirus-related restrictions from Monday.

Weddings and civil partnerships can take place outdoors provided no more than ten people are present, and outdoor sports facilities and large non-food retailers - such as car showrooms - can reopen.

People can also leave home to attend to the needs or welfare of an animal, while those who are shielding will be allowed to spend time outside with people from their own household or, if they live alone, to meet one person outside, providing they maintain social distancing.

On Thursday the Diocese of Down and Connor announced that funeral services are to resume across the diocese with immediate effect, provided they were limited to ten mourners and observed social distancing regulations.

The Executive also agreed that, from Monday, regulations will be introduced that require a 14-day self-isolation period for anyone arriving into Northern Ireland who started their journey outside the Common Travel Area.

Speaking at the Executive’s daily coronavirus media briefing in Belfast, the North’s First Minister, Arlene Foster, confirmed that “anyone who arrives at Dublin or other destinations in the Republic of Ireland and then travels to Northern Ireland will also fall under the regulations.”

The North’s health minister, Robin Swann, told The Irish Times that information on international arrivals would be shared between the authorities on both sides of the Border.

“We’ve an electronic form that will be filled out at the point of arrival, no matter where you land or arrive on this island,” he said, adding that the Republic was “working at this minute in time on a paper form.”

The sharing of information, he said, would be developed under the memorandum of understanding between the two jurisdictions. “The work is near enough complete and should be in place by the 8th of June.”

The authorities North and South, he said, were “working very closely in regard to leaflets and posters that will be on display, no matter where you arrive, to point out that the regulations and the restrictions are there for your point of destination - where you live, not where you arrive. The responsibility is on the individual on their final destination rather than their landing point.”

The Executive had announced last week that these relaxations would be introduced from June 8th provided the R (Reproduction) number of the virus remained below one.

The Deputy First Minister, Michelle O’Neill, said that the medical evidence presented at an Executive meeting on Thursday showed that the R rate was between 0.7 and 0.9, and on this basis “we’ve been able to make good on the proposals we made last week.”

She said these were “small moves but they represent a move forward” and it was “cautious but positive progress in the right direction.”

Ms Foster, said that as Northern Ireland “emerges cautiously and sensibly from lockdown, guided by the latest medical and scientific advice, the progress that we have achieved has been made possible by a majority of people sticking closely to the public health guidelines.”

Referring to a Black Lives Matter protest which was attended by up to 2,000 people in Belfast city centre on Wednesday, Ms Foster said mass gatherings “are a breach of the law and therefore everybody should be aware of that now and there should not be a repeat of that.”

The latest figures from the Northern Ireland Department of Health on Thursday show that there was one more death in the North from coronavirus, bringing the toll to 535.

The department also reported that 30 more people have tested positive for Covid-19, taking the total number of confirmed cases in the North to 4,773. So far 55,909 have been tested for the virus in Northern Ireland.

Earlier, the North’s commissioner for older people called for a balance to be struck between creating a “ring of steel” around care homes during the coronavirus crisis and catering for the emotional needs of residents and their families.

Eddie Lynch said Covid-19 was having a “profound impact” on older people when many already experience loneliness and isolation in their lives.

Mr Lynch told the Northern Assembly’s health committee on Thursday that the average length of life of a person in a care home was 18 months. He said there was now evidence of a deterioration in some residents because there were no family visits.

“It is a really serious issue that we need to consider, but it is a fine balancing act in how we do this in a safe manner,” he said.

“If we’re starting to see that this could be a longer term thing over another year or so then obviously that has huge implications for families in seeing their loved ones,” added Mr Lynch.

He said a number of possible solutions were being explored, one of which were “drive-through visits” where there would be limited contact but families could still see their relatives.

There are 483 care homes in Northern Ireland, caring for around 16,000 residents. At present there are 68 active outbreaks of Covid-19 in care homes, 36 suspected outbreaks and 66 cases where the outbreaks are closed.

The commissioner told the committee there was no “concrete evidence” of people with Covid-19 being sent back to their care homes after they were treated for the virus. But certainly patients were sent back to care homes from hospitals without being tested for Covid-19.

Mr Lynch said from the early days of the virus it had been an “uphill battle getting support for the care home sector” in terms of reporting, testing and personal protective equipment

Mr Lynch said he was pleased Mr Swann was rolling out a system to ensure all care home patients and staff would be tested for coronavirus.

He was unhappy, however, that the target date for completion of such testing was the end of June. He believed it should be completed sooner.

The department has also suggested that thereafter residents and staff would be tested every 14 days. Mr Lynch said such testing should happen about twice a week to ensure a more effective regime for care homes.

Mr Lynch also welcomed the commitment from Mr Swann that the Covid-19 emergency will prompt a comprehensive overhaul and review of the care home sector.