Papal visit to involve closure of many Dublin roads 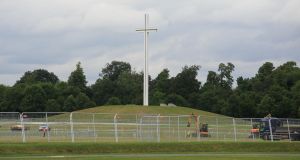 Preparations at the Papal Cross in the Phoenix Park for the forthcoming visit of Pope Francis: when the pope arrives on Saturday, August 25th, road closures will be in place across the city centre and north inner city until 5pm. Photograph: Gareth Chaney Collins

Large-scale road closures will be in place in the city centre and around the Phoenix Park for Pope Francis’s visit to Ireland later this month.

When the pope arrives in Dublin on Saturday, August 25th, road closures will be in place across the city centre and north inner city until 5pm. On the Sunday, a large number of roads surrounding the Phoenix Park will be shut down from 6am until 11pm.

Dublin City Council has opened a public consultation on the proposed traffic restrictions, which were requested by the Office of Public Works (OPW) to facilitate the visit.

The closures are part of a massive security and traffic management operation.

On Saturday, the pope will visit Dublin Castle, and St Mary’s Pro-Cathedral, before giving a speech in Croke Park that evening.

Adrian Cummins, chief executive of the Restaurants Association of Ireland said city centre businesses and restaurants would be hurt by the “blanket” traffic restrictions on Saturday.

“There is going to be disruption for business, but common sense has to apply. We need rolling closures rather than a blanket closure for the day,” he said.

The traffic restrictions had the potential to “rule out an entire business day for the city centre”, Mr Cummins said. Restaurants needed to be able to take in deliveries, and staff needed to get into and out of work, he said.

“The pope coming is good for the city. There will be a large number of people up in the city centre, who will need to be fed and watered, and some will need somewhere to stay,” he said.

Eamon O’Brien, chairman of the Croke Park Streets Committee, said the group did not have any major objections to the road closures, as the papal visit was a rare “once-off” event.

However the council should ensure that crowds heading into the area were well-managed and residents could get out of their homes on the day, he said.

Social Democrats councillor for the north inner city Garry Gannon said he did not predict residents opposing the restrictions.

“My own mother will be out selling yellow hats, so I think the most mature approach is to acknowledge that this can bring something to the local economy for the weekend,” he said.

On the Sunday, the pope will deliver Mass at 3pm in the Phoenix Park. It is proposed 84 roads will be closed in the morning, from 6am or 8am until 11pm that night, around Phoenix Park and the city centre.

“This can’t happen without some road closures . . . What we need to do is make sure it is done in a way that has the minimal impact on residents,” he said.

“Local access will be facilitated as far as possible,” the council said in a public notice on the closures.

The OPW has also applied to Fingal County Council to close 18 roads near Phoenix Park in west Dublin, from 6am to 11.59pm on Sunday.

Both local authorities have opened a public consultation on the proposed closures, and people can make submissions up to August 9th.