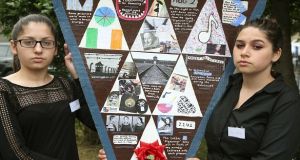 Damaris Paun and Bianca Paun at the Pavee Point centre in Dublin ahead of their trip to Auschwitz to learn about the Roma Genocide. Photograph: Derek Speirs

Young Irish Roma and Travellers were among those who took part in an international event at Auschwitz and Krakow in Poland on Thursday to commemorate the Roma genocide during the Holocaust.

It is the first time a group of Irish Travellers and Roma have taken part in the annual event to mark the elimination of an estimated 500,000 Roma people by the Nazi regime.

They gathered at midday at the memorial for murdered Roma and Sinti at the Auschwitz-Birkenau concentration camp.

“Roma call the Holocaust the ‘Porrajmos’, which means ‘the devouring’ in Romani language. There are many stories of Roma Holocaust victims that are still waiting to be told. We want to play our part in doing this,” said Bianca Paun (20) from Kildare.

“We have an opportunity to remember people of my community who suffered, to educate our younger generations and to make sure it doesn’t happen to anyone again.”

August 2nd is assigned Roma Holocaust Memorial Day because on the night of August 2nd, 1944, the remaining 2,897 Roma women, old men and children from the so called “Zigeunerlager” or “Gypsy” camp were killed in gas chambers. There were no Roma and Sinti survivors from Auschwitz.

It is estimated between one and two-thirds of the Roma community living in Europe at the time were exterminated, or about half a million Roma. At least another 500,000 were displaced, dispossessed, or had their identity papers lost or destroyed. Many were also sterilised against their will.

“Being in Auschwitz and seeing where these events took place makes it all so much more real,” said Gabi Muntean of Pavee Point Traveller and Roma centre.

“It is almost unbelievable what happened under the Nazis until you walk the same rooms, see the same sky and feel what it was like for our community,” she said.

Irish Traveller Patrick Reilly said the community had many similarities with the Roma people.

“For me to visit Auschwitz and see and hear about what happened here makes me realise the suffering of the Roma community. If Irish Travellers fear racism and discrimination – I can only imagine what the fear of discrimination is like for Roma who have the Roma genocide as part of their history.”

The genocide of the Roma people during the Holocaust wasn’t formally recognised until 1982.

Since then, one minute’s silence is observed at the Holocaust memorial stone at the Council of Europe in Strasbourg, and by Roma throughout Europe.

Those who travelled for the event were Damaris Paun (17) from Kildare, Jason Sherlock (20) from Galway, Lois Brookes Jones (20), from Shropshire, England; Bianca Paun (20), from Kildare, Megan Berry (21) from Carlow and Tracey Reilly (30), from Finglas, Dublin.

Also with the group were Lisa Petrovici (20), Enniscorthy; Richard O’Leary (21), from Mullingar; Michael Collins (30), from Coolock, Dublin and Alex Petrovics (20), from Enniscorthy.