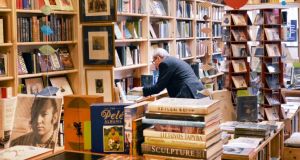 If you want a rare first edition signed by the author, an ancient map, the letters of someone famous or even a long-lost pamphlet about your local parish, Holger Smyth is your man.

“We’re a specialist bookshop – people come to us for books that aren’t available on the Internet or in bookshops,” said German-born Smyth (47) of the Time Traveller’s Bookshop in Skibbereen, Co Cork.

Increasingly, much of the bookshop’s business – it is one of two, with a sister shop in Cork city – is coming from online sales, which Smyth began developing from 2006.

“Our online business used to be only 40 per cent of our business, but it has become more important. In the last two years turnover in the high-street shops has diminished,” he said.

“Now our online business makes up about 70 per cent of our sales. It’s actually doing better than the shops. We sell to private collectors, to students and to universities through our online store.

“Although we have our own website, we also sell through specialist websites. Through our online business we are increasingly reaching more and more customers, in Ireland and abroad.”

However, the cost of postage is a big challenge, he said. Postage costs have increased significantly from Ireland to international destinations. It has become nearly cheaper to use courier services than the postal service.

“That is very challenging situation for us,” Smyth said, adding that because customers are more informed about what they want, they are “more selective”.

“If you want to sell online you need good images of your product and fast shipping routes,” he said.

Running a bookshop in an area such as west Cork can be challenging, he added, with much of the two shops’ trade depending on the two weeks each side of Christmas and Easter, aside from the annual “golden” book-trade months from July through October.

Despite this, Smyth and his wife, Nicola, are planning on growing their on-street operations, with plans for shops in Belfast, Edinburgh and Frankfurt.

“People want shops like ours in their communities, but they don’t understand that the prices on the internet will always be lower than in a real bookshop,” he said.

“The majority of customers are very positive though – one customer told us that he went back to the US and set up a bookshop after visiting ours!”

The couple continually search for new angles. Not only do they track down rare books, maps and the archives of famous people, and run an internet site, but they publish a specialist books magazine, The Time Traveller .

In addition, they teach customers how to run a successful bookshop through their bookshop academy. It’s an unusual mix, but customers approve.

“Local people send visitors to us because they know we are unusual and people often find books in our shops that they believed no longer existed, or that they never imagined existed,” said Holger.

Equally, they seek to fill the needs of west Cork’s significantly-sized expatriate community: “To serve them we offer books in Italian, French, German, Swedish or Dutch, for example.”

When she took over her parents’ bookshop in 2004, it was mid-boom and the picturesque tourist location of Clonakilty was thriving: “The bookshop was very busy,” she said.

“During and after the recession we found that book sales actually increased. Staying in became the new going out and you could buy a book for less than €10 and get a few days out of it.”

The personal touch is crucial, she said: “It’s a year-round business, because Clonakilty is a very attractive town which draws a lot of visitors all year round, plus it has a lot of local book clubs.

“My shop became a social hub. It’s a comfortable and unrushed setting and people say they find it relaxing,” she added, “I know all my customers and they trust me; they know I only recommend what I felt was good.”

“More and people want to break away from digital devices and hold a physical book in their hand.

“Parents are also becoming concerned over children’s consistent use of phones and tablets. They’re actively encouraging them to choose a physical book as they want them to experience the joy and excitement of having one.”

Forty years ago, Cathal O’Donovan changed his family-owned pub in Skibbereen into a thriving bookshop. Readers’ tastes are changing, he said: “People have become very specialised and discerning in their tastes; they’re delving into subjects such as history, alternative health, spirituality, healing, self-sufficiency and gardening.

“There’s an interest in areas of information post-recession that might not have been there during the boom,” he says, adding that a book-finding service is popular with locals.

“We find that parents want to get their child reading and see more of a balance between time spent on electronic devices and on reading.

“That’s our experience and the children progress from one area of books to the next as they grow,” he said.