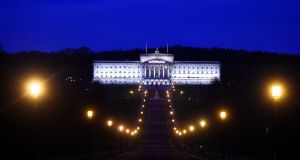 Stormont is seen at night, in Belfast. Photograph: Clodagh Kilcoyne/Reuters

Sinn Féin and the DUP had agreed a mechanism that would have prevented disputes between the parties from immediately collapsing the Northern Ireland Executive before powersharing talks were shut down last week, Government sources say.

Negotiations between the two parties on restoring the Stormont Assembly and Executive after a 13-month stalemate ceased after the DUP said “there is no current prospect of these discussions leading to an Executive being formed” amid tensions over issues including an Irish language Act.

It is understood the agreement reached between the two parties last week required a six-week period to resolve differences in the event of a resignation. Powersharing collapsed suddenly last year when Martin McGuinness stood down in response to the controversy over a huge potential overspend on the renewable heat incentive.

The arrangement reached between the DUP and Sinn Féin, Government figures claimed, was aimed at ensuring the stability of the Executive. This was at the request of the DUP, which warned any agreement reached could be broken and result in a general election.

The DUP has insisted there was no agreement last week but Sinn Féin and the Government have stressed their belief that one had been arrived at.

It allowed for Arlene Foster to return as first minister, despite previous calls by Sinn Féin for her to stand aside. It included a committee to examine the Bill of Rights and a review of the Petition of Concern, a cross-community veto that has been used to defeat proposals in the Assembly such as same-sex marriage.

There was no agreement on the issue of marriage equality and, as previously reported, the agreement also included a compromise whereby there would be an Irish language Act as well as Ulster Scots and culture Acts.

Taoiseach Leo Varadkar and Tánaiste Simon Coveney will meet the Sinn Féin leadership in Dublin on Monday to assess the prospect of an early resumption of the talks. A spokesman for Mr Varadkar said he was eager to hear Sinn Féin’s assessment of the events of last week and how to get the two sides back to the table.

The Taoiseach will emphasise the need for dialogue and compromise between the two parties, his spokesman added.

Asked if there were any plans to meet the DUP, the spokesman said Mr Varadkar was focused on today’s meeting “at the moment”. The DUP did not meet Mr Varadkar when he visited Stormont last week as it did not view powersharing as a North-South issue.

It is understood the Government believes in a “cooling-off period” before negotiations between the two parties should recommence.

Meanwhile, the Taoiseach has been urged to defend the legal, human and language rights of Irish citizens in the North in a letter signed by 100 prominent people in the arts, law, sport, academia and civil society and delivered to his office last Friday.

The letter mirrors a similar letter to Mr Varadkar sent by 100 representatives of civic nationalism in the North before Christmas.

In the letter, Mr Varadkar is told the signatories are “shocked at the level of permanent inequality in respect of access to rights that people in the North are expected to endure. In summary,” it says, “these are: marriage equality, language equality and access to justice before a court of law.”

It says “families of those affected by the conflict in the North cannot gain access to justice in court”, citing the lack of funding and court resources.

It says Irish people are proud of their role in legislating for marriage equality and are “rightly championed around the world as bold and determined advocates for tolerance and equality”.

“How can we, as citizens, in Donegal or Louth, sit idly by when rights enjoyed by us are denied to our neighbour, families and friends in Derry or Armagh?” the letter asks.