Varadkar tells May he does not want direct rule in North

SF does not want ‘cooling off period’ while DUP says key decisions for North’s schools, infrastructure and hospitals needed 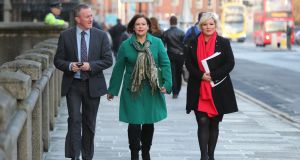 The Taoiseach Leo Varadkar spoke by telephone with the British Prime Minister Theresa May on Monday evening regarding the recent collapse of powersharing talks in the North.

The call followed a meeting between the Taoiseach and Tánaiste Simon Coveney and Sinn Féin’s Mary Lou McDonald and Michelle O’Neill to review recent developments in the north.

The Taoiseach emphasised the Government’s full commitment to the Good Friday Agreement, and its determination to secure the effective operation of all its institutions.

In a statement following the meeting Mr Varadkar said: “As co-guarantor to the agreement, the Government will continue to engage with the parties in Northern Ireland and the British Government to support the urgent formation of a new Executive by the mandated political parties.

“The Government’s firm position is that the Good Friday Agreement and subsequent agreements must be implemented in full, and in this context the Taoiseach and Tánaiste reiterated that the Irish Government does not want to see the introduction of direct rule in Northern Ireland”.

A Downing Street spokesperson said Mrs May had spoken to Mr Varadkar about the recent phase of political talks in Northern Ireland and of their disappointment that an agreement had not yet been reached to restore an Executive.

“Both leaders recognised the progress and serious engagement made by the parties.

“The Prime Minister said she believed there was scope for agreement and reiterated the UK Government’s priority was still to get devolution up and running again in Northern Ireland.

“They agreed to continue to stay in close contact as the parties reflect on the best way forward to re-establish devolved Government in Northern Ireland.”

Earlier Ms McDonald said there could be no “cooling off period”, that direct rule from London was “not on the table” and the British and Irish Governments must immediately take steps to convene an intergovernmental conference to take key decisions about the North.

She was speaking outside Government Buildings before a meeting with the Taoiseach and Mr Coveney.

Ms McDonald rejected the idea of a “cooling off period” floated by Government sources in Dublin last week following the collapse of the Northern talks aimed at restoring the Northern Executive and Assembly.

“We don’t accept any call for a cooling off period. In fact we’re saying very clearly that there cannot be a vacuum. We need action. And we need the two governments to be decisive at this point,” she said.

The Sinn Féin leader said that the two Governments should activate the provision in the Belfast Agreement which provides for an intergovernmental conference made up of ministers from the Dublin and London governments. It provides a framework for input from the Irish Government into the affairs of Northern Ireland.

Ms McDonald also called for the British Government to release funding for legacy inquests and for the Irish language and same sex marriage issues to be addressed.

“Direct rule is not on the table. What is on the table is decisive action from the two governments and that must find expression in the first instance in the calling of the intergovernmental conference,” Ms McDonald said.

She also reiterated the Sinn Féin position that there could be no return of the institutions without a settlement of the language question.

“Be in no doubt there will be no resumption of the institutions until the matter of an Ghaeilge is dealt with,” the Sinn Féin leader told reporters. “But be in no doubt also that there is a solution to this and the solution was arrived at by the parties and we are very, very disappointed that the DUP chose not to bring that over the line.”

As Sinn Féin sat down for talks with the Irish government on the Stormont powersharing crisis, DUP leader Arlene Foster was calling on Downing Street to start taking big spending decisions.

“During a telephone call this afternoon, I asked the Secretary of State for Northern Ireland to not only set a budget but also take key decisions impacting on our schools, infrastructure and hospitals,” she said in a statement afterwards.

“Frontline staff have been living hand to mouth for too long. The Northern Ireland people deserve better,” she added.

“I am not prepared to allow this to continue. Decisions need to be taken.”

She called for decisions to be made on infrastructure, education and healthcare.

The DUP, whose 10 MPs are propping up the Conservatives at Westminster, effectively ended talks aimed at bringing the 13-month political impasse in the north to a close last Wednesday when Ms Foster said she did not believe it would be possible to form an Executive.

It surprised many who had believed a deal had been close on contentious issues such as Irish language, marriage equality and the legacy of the past.

In the midst of the latest Stormont crisis, Downing Street has insisted that the UK Government is “fully committed” to the Good Friday Agreement.

It is working towards getting the devolved administration at Stormont up and running again, Mrs May’s official spokesman confirmed.

Northern Ireland Secretary Karen Bradley is due to update Parliament on the Stormont impasse on Tuesday.

Mrs May’s spokesman said: “It is disappointing that agreement has not yet been reached between the parties, but we do still believe that the basis for an accommodation exists.”

Ms Foster has insisted that she is committed to devolved government in Northern Ireland but also warned that it will not be at any price.

“I stand ready to form one tomorrow without any pre-conditions,” Ms Foster said.

“Sinn Féin has been refusing to form a government for over 400 days until they have their own party political matters addressed.” - Additional reporting PA