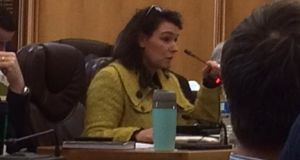 Cllr Aoife Thornton tried to get a chance to raise the issue of poor road conditions at a meeting of Kerry County Council on Monday. Photograph: Anne Lucey

A Fine Gael councillor was told on Monday she should “dye the hair blond” if she wanted to be noticed in order to get speaking time at Kerry County Council.

The remark by party colleague Cllr John Sheahan, cathaoirleach of Kerry County Council , and chairman of the meeting came after dark-haired Cllr Aoife Thornton twice raised objections to being overlooked, claiming she was not noticed and was not given speaking time on issues.

“I’ve worn a yellow jacket today to make sure you see me,” Ms Thornton, who is a solicitor by profession, said, indicating she was frustrated at being ignored by Mr Sheahan.

Her district colleague, Sinn Féin’s Robert Beasley urged her to put on a helmet instead.

This was during a discussion on roads in the morning where Ms Thornton wanted to raise the poor state of the road network in north Kerry. She also raised the issue of having to put down repeat motions.

However, during a discussion in the afternoon at around 3.40pm the councillor who is being spoken about as a future general election candidate for the party again claimed she was being ignored and not given speaking time by the mayor.

“Yellow jackets don’t work,” Ms Thornton told Mr Sheahan, saying she would wear something else the next time.

“I have to be entitled to speak,” she said.

However Ms Sheahan said: “In my own defence nobody else saw you either”.

“The only thing now is dye the hair blond,” Mr Sheahan advised her.

However the pair seem to make amends an hour later when in a gesture towards Ms Thornton, Mr Sheahan said there were two motions that were similar – both on north Kerry roads, and he would take the discussion on Ms Thornton’s, which was first, and he was also cognisant of her objections.