Food, tourism and culture to be celebrated at Galway event 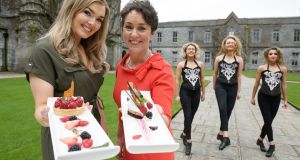 Food, tourism and culture are to be celebrated in Galway in late April when Good Food Ireland marks the city’s European region of gastronomy designation.

International chefs and key players in all three sectors are due to participate in the second biennial “touRRoir 18” global forum which is to be held at NUI Galway (NUIG) from April 23rd to 24th.

The Good Food event, which will run this year in partnership with The Irish Times, was first held in Croke Park, Dublin, in 2016.

Good Food Ireland founder and managing director Margaret Jeffares said food, tourism and culture represented major international industries in their own right, and the aim of the event was to nurture dialogue between sectors and allow companies to grow and local communities to benefit.

The event’s name touRRoir 18 combines “tourism” with “terroir”, she said, and it will open with a “hall of fame” gala dinner on April 23rd, cooked by international and national chefs.

World-class practitioners and experts across the three sectors will attend a one-day forum on April 24th.

The event will be preceded by Galway’s seventh annual food festival,which takes place from March 30th to April 2nd.