Core reasons behind an ailing health system in Northern Ireland 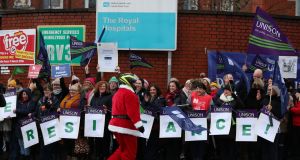 Sweet thing: Santa delivers sweets to nurses on the picket line outside the Royal Victoria Hospital in Belfast on Wednesday. Photograph: PA

Waiting lists are growing and while health is one of the key priorities of the talks aimed at restoring devolved government in Northern Ireland, there is still no minister for health to make decisions. So what’s gone wrong with the North’s health service?

Why are nurses taking industrial action?

December 18th was the first time in that members of the Royal College of Nursing (RCN), which represents about 9,000 nurses in Northern Ireland, have gone on strike in the organisation’s 103-year history.

The issues are the disparity in pay between nurses in Northern Ireland and those in the rest of the UK. The RCN says members are “continuing to fall further and further behind” and the number of vacant nursing posts – some 2,800, according to the college of nursing – creates unsafe staffing levels. The pay differential exacerbates this by making it harder to recruit and retain staff, not least because of higher pay available in the NHS in England, Scotland or Wales.

Nurses have spoken of feeling stressed, under pressure and “stretched to breaking point”. The organisation’s director in Northern Ireland, Pat Cullen, has emphasised that the “last thing” nurses want to do is strike, but they feel they have “no choice”.

They have been joined by three trade unions: Unison, Unite and Nipsa. Unison, the largest health union, also represents about 6,500 nurses in Northern Ireland, and between them the unions represent many other sectors, including ambulance paramedics and staff who carry out other essential jobs in the health service, such as healthcare assistants, health visitors, speech and language therapists, porters and cleaners.

Unison’s members have been taking part in staggered strike action since November 25th.

How has this situation come about?

Several factors have combined to trigger this crisis in the North’s health service.

Health is a devolved matter in Northern Ireland, so in theory it should be dealt by the Assembly and Executive at Stormont. The reality is that Stormont has been mothballed for almost three years; it collapsed in January 2017 following a scandal over a renewable heating scheme and its absence means no health minister to make key decisions or implement the 10-year plan for transforming healthcare in Northern Ireland outlined in the 2016 Bengoa report.

Among other changes, it called for ring-fenced money to transform how services are delivered. But it has still not been implemented and in the interim waiting lists have continued to lengthen.

According to the latest figures – published by the Department of Health in November – 306,180 people were waiting for a first consultant-led outpatient appointment as of September 30th.

Compounding these pressures is the widening differential between pay for healthcare workers in Northern Ireland and NHS employees in the rest of the UK. The effect of this has been to undermine staff morale and make it harder to recruit and retain healthcare workers.

In 2015, then minister for health Jim Wells introduced changes that broke the principle of pay parity between Northern Ireland healthcare workers and those in England and Wales.

In 2016 another former minister for health Simon Hamilton imposed a 1 per cent pay award, which produced more discord from health workers. The following year a three-year pay deal was agreed at Westminster but could not be implemented fully in Northern Ireland in the absence of an Executive.

The health unions have published figures highlighting this pay gap – according to the RCN, for example, a newly qualified band-five nurse in Northern Ireland will earn £22,795 (€26,719) each year, compared to £24,214 in England and Wales and £24,670 in Scotland.

Pay levels also make agency work – which is better paid – more attractive, which the RCN says has led to “record levels of expenditure” on agency staff in a health service already stretched.

What has been done to tackle this?

Permanent secretary at the department of health Richard Pengelly made an additional pay offer of £51 million at the end of November and a further £28 millionj earlier this month. Mr Pengelly is the senior civil servant in charge of the health service in the absence of a minister.

“In the absence of ministers this is the furthest I am able to go,” he said.

The department says this means the pay gap between staff in Northern Ireland compared to those in England will be about 1 per cent, and it will provide a projected increased of 3.1 per cent in staff pay, on top of a similar increase of 3 per cent last year.

It says this keeps Northern Ireland on track to meet the three-year UK-wide pay deal for NHS staff. And it has publicly stated its intention to match the third and final year of the deal.

This pay offer was rejected by the trade unions, who said it was “insufficient” and fell short of what they had asked for.

Health was a key issue in the December general election and the political talks aimed at restoring the Stormont Assembly resumed on December 16th. The DUP and Sinn Féin said they had asked Northern Ireland Secretary of State Julian Smith for a “big cash injection” in order to address the problems in the health service.

Politicians have insisted Mr Smith has the authority to step in and resolve the issue by seeking additional funding from the UK government. But he has said repeatedly that health is a devolved matter that could be solved “by the parties coming together and moving things forward”.