Royal College of Obstetricians and Gynaecologists defends its review of CervicalCheck 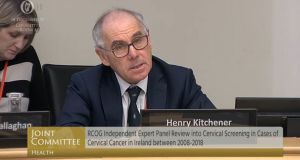 The authors of an independent review of tests made under the CervicalCheck screening programme have defended their work following criticism from patient advocates.

The review by the Royal College of Obstetricians and Gynaecologists earlier this month found an opportunity to identify 159 women’s cervical cancers had been missed by CervicalCheck out of 1,038 women whose slides were checked.

However, it concluded that the Irish cervical cancer screening programme was “performing effectively”.

Vicky Phelan and Lorraine Walsh, two of the best-known women affected by the CervicalCheck controversy, have said they have no confidence in the review after discovering errors were made in labelling their own slides.

Prof Henry Kitchener, the college’s lead assessor, said the mislabelling of the two women’s smear test slides appeared to be a “remarkable coincidence” that took place following the completion of the review.

He told the Oireachtas health committee that the mislabelling issue had no implications for the safe conduct of the review. Supplementary letters have been issued to three of the women in the review, Prof Kitchener confirmed, and in two of these cases the original conclusion was altered.

He expressed regret for “these isolated incidents” and that the college was confident every woman had received an accurate disclosure of her review results.

The review has also been criticised after it emerged that some women were given a “concordant” result even though some of their slides were missing.

Prof Kitchener said the fact that some slides were not available would not have altered the conclusions reached in the review.

“I’m certain those missing slides would not have altered our conclusions,” he said.

He added that the number of patients involved represented less than 2 per cent of the overall cohort, and the women who received a “partial report” were not a homogenous group.

Dr Tony Holohan, chief medical officer at the Department of Health, admitted it was “surprising” that two of the women affected by the mislabelling were Ms Phelan and Ms Walsh, but he pointed out that the college would not have known the identities of the women whose slides were being reviewed.

Dr Holohan apologised for not providing his statement to the committee in advance, following criticism from TDs.

Asked about the comments of Ms Walsh at Tuesday’s sitting of the committee, at which she claimed she had been “dismissed, ignored, bullied and threatened” by the Department, Dr Holohan said he was aware of the remarks.

Dr Holohan said the Department regarded the input of patient representatives as very important and it was at an advanced stage in drawing up proposals to recognise the time these representatives put in.