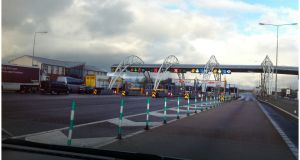 People travelling by car and on motorcycle face a 10 per cent increase on the M3, with the cost rising to €1.50 for cars and 80 cent for motorcycles. File photograph: Bryan O’Brien/The Irish Times

Hauliers face a 10 cent increase in toll charges on many of the State’s motorways next year but people travelling by car or motorcycle will only see the cost of using the M3 Dublin to Cavan route rise.

Transport Infrastructure Ireland (TII) said the changes, attributed to inflation, are to come into effect from January 1st.

People travelling by car and on motorcycle face a 10 cent increase on the M3, with the cost rising to €1.50 for cars and 80 cent for motorcycles. TII said the toll had not increased since 2012 on the motorway, on which an average of 35,400 journeys are made each day.

HGVs with four axles will see tolls increase by 10 cent to €6.20 at a number of toll points including the M1 at Drogheda, the M8 at Rathcormac/Fermoy, the M7/M8 at Portlaoise, the M25 Waterford Bypass, the M6 Galway to Ballinasloe and the M18 Limerick Tunnel. HGVs using the M4/M6 Kinnegad- Kilcock toll will also see an increase of 10 cent, with the tariff rising to €7.20.

The cost of using the Dublin Port Tunnel is not being changed and most motorists using the M50 will be unaffected.

However, people driving goods vehicles may face new rates depending on weight.

Buses and coaches, which carry more than 8 passengers, will see the cost of using the M50 rise by 10 cent.

Figures from TII also show that the average number of daily journeys on each of the motorways increased over the past year. The M50 continued to be the most used motorway each day, with an estimated average of 151,227 daily trips (up 4 per cent).

The M1 Dundalk western bypass is the second busiest motorway with an average of 42,209 daily journeys made this year. The M25 Waterford bypass has the fewest daily journeys with an estimated average of 9,773. However, the route saw the largest increase over the period, (up 7 per cent).