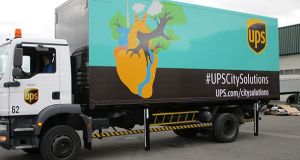 A container (featuring a design by Dearbhla ní Fhaoilleacháin Ryan from NCAD) will be placed at a fenced off area on Wolfe Tone Street each day. Photograph: UPS 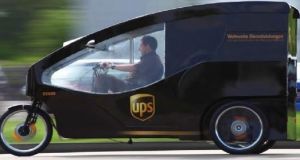 Electronically assisted tricycles, as well as individuals on foot, will be used to deliver packages to and from the container. Photograph: UPS 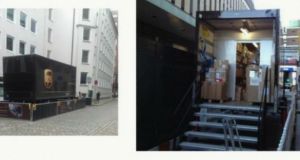 A new plan to reduce the number of delivery vans on Dublin’s streets will see goods being distributed by cyclists and walkers taking parcels from a special container in the city centre.

The new system, modelled on a scheme in Germany, will be run by UPS in conjunction with Dublin City Council.

Dublin City Council hopes the scheme will lead to a reduction of 150-200 vehicle movements within the trial area on the city’s northside.

It involves a storage container being placed on Wolfe Tone Street from which walkers and cyclists operating electrically assisted tricycles - or ebikes - will take packages and deliver them to local businesses and houses.

UPS operates four such containers in Hamburg, Germany, and first suggested the idea for Dublin in 2015.

The pilot, initially applying to UPS customers, will begin on June 1st and will last for six months. If it is successful the council said it would consider introducing it across the city on a permanent basis.

Council senior executive engineer Mary Hussey said she hoped the plan would help to reduce vehicles dispatched to the city centre daily, increase capacity for the movement of people and goods and facilitate efficient goods deliveries.

She said there are 314 deliveries and pick up stops within a 1.5km radius of Church Street (264 commercial, 27 residential and 22 pickup stops).

Under the new plan many of these would be served by ebikes and individuals on foot instead of vehicles.

The trailer will be filled with cargo each day and driven into the city where it will be placed at a specially fenced-off location on Wolfe Tone Street.

Walkers and cyclists will take packages to and from it during the day, and in the evening it will be driven away again.

Ms Hussey said a location usually used for coach parking had been selected. “We would hope to rescind that coach parking [AND]get a permit for the trailer,” she said.

Councillors at a meeting this month expressed support for the idea in principle but some voiced concern about the location.

“The fish market would be much more appropriate,” said Mannix Flynn, adding that residents around Wolfe Tone park would be disappointed with the increase of bike traffic and the loss of parking.

Ms Hussey said the plan could be scrapped if it does not work.