Miriam Lord: Enda's final day was a work of genius 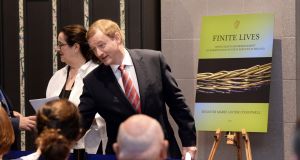 Taoiseach Enda Kenny launching the Finite Lives report by Senator Marie-Louise O’Donnell at Government Buildings. He then announced he was stepping down. Photograph: Dara Mac Dónaill

It was never going to be a happy ending, but at least Enda Kenny got to write the last line.

Whether by accident or design, his final day as leader of Fine Gael was a work of genius.

He provided a memorable afternoon prelude to his resignation, luring the massed ranks of the media to Government Buildings for a contemplative session on the nature of grief and loss. While the cameras rolled and the colour writers wallowed in the evocative theme of “finite lives”, Enda struck a variety of pensive poses, staring dreamily into the distance, alone with his thoughts.

Just in case we didn’t know that Fine Gael was about to be plunged into mourning for its most successful leader and it was time to meditate on the sorrowful mysteries of a political life cruelly ended, the Taoiseach waxed philosophical about death and the meaning of life at the launch of a report by Senator Marie Louise O’Donnell on end-of-life issues in Ireland.

It left everyone feeling suitably low for the sad announcement he was planning later in the afternoon.

A stampede of journalists arrived, scooping up copies of the report with its photo of a wicker coffin on the front even though they hadn’t the slightest bit of interest in the material within. Three television cameras were set up on tripods at the back of the room and photographers were falling over each other to see if they could somehow snap the Taoiseach next to the words “Finite Lives”.

The launch was scheduled for 3pm. The Taoiseach, not unusually, was half an hour late. In the meantime, word came through that he had asked for the parliamentary party meeting to be brought forward by an hour to 4.30pm. This whipped the journalists into a state of nervous collapse. Surely, but surely, this meant he was going to announce his resignation.

Enda bustled in eventually. “They’re all looking at me as if there’s something wrong,” he joked to Marie Louise, who was also in an emotional state.

In his speech, the Taoiseach ruminated on matters of life and death and how we should consider how “to leave the life we love so much”. He spoke slowly, placing heavy emphasis on the word “leave”.

There was a frisson in the reporting ranks.

And then he spoke of an earlier report compiled by Senator O’Donnell, where she examined how death is treated in the Civil Service.

“And the examples are many,” he began. “Five people working in an office, maybe for 10 or 15 years and suddenly someone’s no longer there. But the desk is there. The work is there and the memory is there and that affects the people who work with that person for those years.”

The reporters at the back began to levitate.

Marie Louise was in tears during his speech. Meanwhile, the Taoiseach’s staff gathered in the doorway to watch him. He had already told them he was going to resign. They didn’t say a word about it to anybody, but solemn faces gave the game away.

Questions were invited from the floor. The journalists were struck dumb. There was a strained silence.

Enda seemed to be enjoying their discomfiture.

An invited guest asked Marie Louise about her “vision”.

Smiling again, Enda left the room 20 minutes before his appointment with the parliamentary party.

It started at 4.37pm and was over seven minutes later.

Backbencher Noel Rock read the minutes. Enda stood and read his “gone by midnight” statement. Party chairman Martin Heydon made a brief reply and that was it. The leakers were well and truly plugged when the statement was tweeted and emailed the moment the Taoiseach started to speak.

The way he handled his resignation meant he turned what was the inevitable into a surprise. And he took ownership of the situation. He did it his way, which is what he wanted.

He got two standing ovations. Some TDs welled up in sympathy as he struggled to maintain his composure when talking about his family.

“It was very emotional. Heartbreaking stuff” said one backbencher afterwards, forgetting he had been agitating for Enda’s removal for some time.

Then Enda, fresh from his discussion about life and death, cast a cold eye down the room and fixed his gaze on Simon Coveney and Leo Varadkar.

Which they did. Immediately.

Enda, who said he had an appointment but didn’t elaborate, left the stage immediately, although he resumes his normal round of appointments on Thursday morning.

Strenuous efforts began by an influential cohort in the parliamentary party to have the proposed date for the leadership election moved from Friday, June 2nd, to Thursday, June 1st. Horrified TDs and Senators realised the Friday in question clashed with the Oireachtas golf society’s annual President’s Cup which is being held this year in Killarney. Catastrophe.

Meanwhile, there was a race to the plinth by minor TDs and Senators anxious to get themselves on radio or television and laud the great Enda Kenny, their magnificent leader of 15 years and a mighty man.

Michael Ring went live from the plinth minutes after the announcement. “I had the honour of proposing Enda Kenny for the leadership of the Fine Gael party,” he bellowed.

To the Ringer’s left stood a little-known Senator, giving valuable insights into a microphone. “I’m leaning vurry heavily towards Leo Varadkar,” he declared.

“A man who gave fifty years of his life . . .” roared the Ringer, still going strong.

Backbencher Noel Rock, who cannot pass a microphone without making a comment, was like a child in a sweetshop.

Deputy party leader James Reilly, who looks set to lose his job a second time, once the election is held, barrelled out to sing Enda’s praises. “Are you now the acting leader?” he was asked, for devilment.

“I very much am not!” barked Reilly.

There was flurry in the far corner, near where Bryan Dobson was setting up for the six o’clock news. It was the arrival of Gerry Adams and a Sinn Féin microphone party, looking for a slice of the action.

Gerry, showing a complete lack of grace, proceeded to say what a terrible leader Enda Kenny had been. Damning with faint praise, he said he wanted to acknowledge that Kenny “did his best” but his best wasn’t good enough for Sinn Féin’s high standards.

Michael Ring, at this stage, was conducting a telephone interview. “Well, look it, he has a lot of options open to him . . .”

There was no sign of Leo or Simon. Leo was missing for most of the day because he was doing an Irish exam. He’s been doing an advanced level Irish language course for higher civil servants.

But back to Enda’s meeting.

“It was very sombre,” said the party chairman.

After 15 years, Enda Kenny is no longer leader. It’ll be strange without him, for a while.

The election campaign will be mercifully brief.

As he sat, flicking through the Finite Lives report, did he see the Heaney poem on page 10?

and flood tide in the heart

and time to go

The sea-nymphs in the spray

will be the chorus now.

(Plenty, actually. But enough for now.)