Fine Gael contest under way as Enda Kenny steps aside

Leo Varadkar ahead of Simon Coveney in survey of elected representatives

Your questions for Enda Kenny 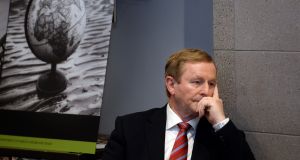 Taoiseach Enda Kenny at Government Buildings yesterday: Mr Kenny will remain as Taoiseach until his successor is elected by the Dáil. Photograph: Dara Mac Dónaill

Simon Coveney and Leo Varadkar were last night canvassing support and preparing to launch their campaigns to be the next leader of Fine Gael following Enda Kenny’s retirement from the role.

The party’s national executive will meet on Thursday evening in Dublin to finalise the procedures and rules of the contest.

Both Mr Varadkar, the Minister for Social Protection, and Mr Coveney, the Minister for Housing, are expected to formally launch their campaigns in Dublin on Saturday. The two are seen as the early frontrunners to succeed Mr Kenny.

A spokesman for Tánaiste Frances Fitzgerald would not be drawn last night on whether she would contest the election, though sources said she was confident she could secure the eight nominations needed to enter the contest. It is understood she is contacting female representatives of the party to ensure her place on the ticket.

Minister for Education Richard Bruton said he would decide if he would enter the race in the coming days.

An extensive survey by The Irish Times of members of the Fine Gael parliamentary party and councillors in recent weeks suggests Mr Varadkar starts the campaign in the lead, but with many of the party’s elected representatives undecided. The survey shows Mr Varadkar has 20 per cent of the available votes among TDs, Senators, MEPs and councillors, while Mr Coveney has 14 per cent. 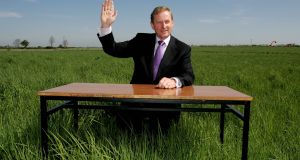 The votes of the parliamentary party of TDs, Senators and MEPs accounts for 65 per cent of the vote in the leadership race, with councillors accounting for 10 per cent. The remaining 25 per cent is allocated to party members.

Mr Coveney has the confirmed support of seven TDs so far while Mr Varadkar has 15. Among Senators, the count so far is six for Mr Coveney and four for Mr Varadkar. Others are undecided or have yet to declare.

There are 230 Fine Gael councillors across the State and support for the frontrunners is evenly balanced among those to declare so far. The Irish Times has placed 50 in Mr Varadkar’s camp with 43 supporting Mr Coveney.

Mr Kenny’s departure as Fine Gael leader was widely anticipated, but TDs were still taken aback when he announced his decision at a brief meeting of the parliamentary party at Leinster House on Wednesday evening. His retirement as leader was effective from midnight on Wednesday.

The campaign will last just over two weeks, and a new party leader will be announced on Friday, June 2nd. Mr Kenny will remain as Taoiseach until his successor is elected by the Dáil.

Mr Kenny, who has been Fine Gael leader since 2002 and Taoiseach since 2011, said he would allow the new leader some time to conduct discussions with Fianna Fáil and the Independents before he will stand aside as Taoiseach.

Mr Kenny made a short speech in which he mentioned his “uninterrupted service” in the Dáil since 1975 and thanked his supporters in his Mayo constituency and his family.

The Taoiseach was described by those present as “very emotional” and was given a number of standing ovations by his colleagues.