US decries assault of anti-Erdogan protesters in Washington

Fighting erupted among protesters on the streets of Washington, D.C. on Tuesday (May 16), as Turkish President Tayyip Erdogan met with U.S. President Donald Trump at the White house earlier in the day. 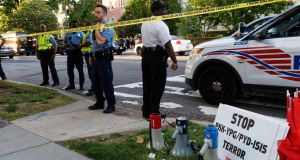 Police secure the street outside the Turkish embassy during a visit by Turkish President Recep Tayyip Erdogan on May 16th 2017 in Washington, DC. Earlier, after Erdogan had met US President Donald Trump at the White House, the Turkish leader’s security detail had clashed with pro-Kurdish protesters, leaving at least eight people wounded. Photograph: Dave Clark/AFP/Getty Images

The United States has said it was voicing its “strongest possible” concern to Turkey over a street brawl that erupted between protesters and Turkish security personnel during President Tayyip Erdogan’s visit to Washington, D.C.

Turkey blamed the violence outside its ambassador’s residence on demonstrators linked to the Kurdistan Workers Party (PKK), but Washington’s police chief called it a “brutal attack” on peaceful protesters.

Police said 11 people were injured, including a Washington police officer, and two people were arrested for assault. At least one of those arrested was a protester.

“We are communicating our concern to the Turkish government in the strongest possible terms,” State Department spokeswoman Heather Nauert said in a statement.

Washington Police Chief Peter Newsham said at a news conference on Wednesday that police had a good idea of most of the assailants’ identities and were investigating with the Secret Service and State Department.

A charging document for one of those arrested, Ayten Necmi (49) of Woodside, New York, said peaceful protesters were taunted by a second group of demonstrators who shouted obscenities and taunts at them.

The document said that four or five Middle Eastern men in dark suits from the second group assaulted the peaceful protesters. It said that about eight people told officers they were attacked, thrown on the ground and stomped.

The Turkish Embassy said in a statement that the protesters were affiliated with the outlawed PKK. The group is considered a terrorist group by both Turkey and the United States.

The embassy said that Erdogan was in the ambassador’s residence after meeting President Donald Trump, and Turkish-Americans who were there to greet him responded to provocations from PKK-linked protesters.

“The violence and injuries were the result of this unpermitted, provocative demonstration,” the statement said. The claim that protesters were linked to the PKK could not immediately be verified by Reuters.

Tens of thousands of Turks have been detained as Mr Erdogan cracked down on the press and academia following an attempted coup in 2016. Mr Trump made no mention on Tuesday of Erdogan’s record on dissent and free speech.

Mehmet Tankan (31) said he was one of a dozen protesters outside the ambassador’s residence chanting anti-Erdogan slogans when the brawl broke out.

Mr Tankan said by telephone that seven security personnel, some carrying firearms, rushed up and began punching him, bruising him all over his body.

Mr Tankan said the violence was worse than when Erdogan visited Washington in 2016 and scuffles erupted between his security detail and demonstrators.

“The next time they could kill us easily. I’m scared now too, because I don?t know how it will affect my life here in the United States,” said Mr Tankan, who lives in Arlington, Virginia.