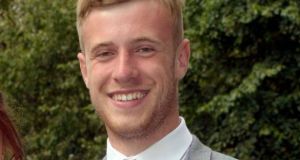 Gardaí investigating the murder of Cameron Blair at a house party in Cork last week have seized clothing and footwear for forensic examination. Photograph: Denis Boyle.

Gardaí investigating the murder of Cameron Blair at a house party in Cork last week have seized clothing and footwear for forensic examination as well as mobile phones belonging to some of those who attended the party.

Detectives say they are making good progress in the investigation into the murder of the 20-year-old student, who died after being slashed in the neck by a teenager who was trying to gain re-entry to the party in a house on Bandon Road.

It is understood that gardaí have seized clothing and footwear from a number of teenagers who were at the party. Gardaí hope that a forensic analysis of the clothing will assist them in identifying the person who fatally wounded Mr Blair during a row at the door to the house.

Technical experts have started examining a number of phones seized from some of those who attended the party to see if they contain any images, video clips or text messages that will help them clarify the sequence of events that led to the fatal assault.

Officers are continuing to examine more than 200 hours of CCTV footage downloaded from a variety of sites in the Bandon Road/Barrack Street area.

Gardaí would not be drawn on whether the knife they believe was used in the killing has been recovered but a search of a green area off Connaught Avenue has concluded after a number of days.

Funeral arrangements for Mr Blair are expected to be announced later this week after a postmortem by State Pathologist Dr Heidi Okkers.

A past pupil of Bandon Grammar School and Hamilton High School in Bandon, Mr Blair was a second year chemical engineering student at CIT and was living in student accommodation in Bishopstown.

He had been helping his father at his light engineering business last Thursday before coming up to Cork to attend the house party.