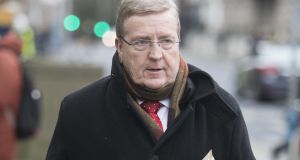 Last time around Pat Breen (above) was well ahead of his colleague Joe Carey but clever vote management between the two meant the party got two seats despite Fianna Fáil having a higher percentage of the vote. File photograph: Tom Honan

The decision by Clare Independent TD Dr Michael Harty to stand down after one term in the Dáil creates a battle for Fine Gael to keep its two seats and for Fianna Fáil to gain a second seat.

The West Clare GP ran a “no doctor no village” campaign and his votes came from across the constituency so will benefit candidates in all geographical locations.

But in a county known for its maverick streak, analysts suggest that between the two big-beast parties and their six candidates they will get a maximum of 70 per cent of the vote.

That leaves 30 per cent for the remaining candidates and Clare is known as a constituency to go for alternative contestants.

Last time around, Fine Gael TD Pat Breen was well ahead of his colleague Joe Carey but clever vote management between the two meant the party got two seats despite Fianna Fáil having a higher percentage of the vote. Their third candidate is Senator Martin Conway.

The voting scandal in the Dáil is not seen locally as having much impact on Fianna Fáil’s Timmy Dooley, who will keep his seat and is under pressure to bring in a second TD.

In the south of the constituency, Fianna Fáil mayor of Clare Cllr Cathal Crowe increased his already high profile during the controversy over the plan to hold a Royal Irish Constabulary (RIC) commemoration when he said he would boycott such an event. The party’s third candidate is the popular Rita McInerney, who runs a shop in Doonbeg and has strong west Clare support.

And then there is former Labour TD Michael McNamara, who lost his seat in 2016. The campaign of the Scarriff-based farmer was put into disarray following the death of his aunt, who brought him up, just as the election campaign was about to start.

The question is whether McNamara, now running as an Independent, can re-build a campaign to renew the profile he previously had as a TD, but his vote will be strengthened considerably because Labour is not running a candidate.

The Social Democrats are not running a candidate either but there are a number of candidates for the left-wing vote and for the considerable floating vote in the county, including Sinn Féin’s Violet-Anne Wynne.

The Sinn Féin tsunami in opinion polls is expected to strengthen her vote significantly but it is unlikely to be a strong enough wave for her this time out.

The Green Party’s Cllr Róisín Garvey is expected to put in a strong performance but the Green momentum is not as strong in Clare and while she will be expected to get a substantial vote in urban centres like Ennis, there is a question over whether there is a large enough demographic to get her through on transfers.

Health and the lack of GP services, housing and poor planning, public transport and the cost of living all feature as issues in Clare.

Is it Fine Gael or Fianna Fáil to get two seats with the fourth seat going Independent? Or will it be two each for the State’s two largest parties?

Cocooning Q&A: How does it work? Who must do it? Can people visit my home? 16:58
Coronavirus: Managing the surge in cases is a day-to-day battle 16:48
Man (30s) assaulted by group at supermarket in North Co Dublin 16:40
Irish flight bringing PPE from China arrives in Dublin 16:37
Coronavirus: ‘Last time I saw her was when she was put into the ambulance’ 16:34