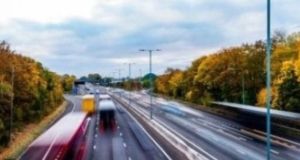 The High Court ruled in December that a €220m plan to upgrade the N28 road was properly assessed by An Bord Pleanála.

A campaign group representing up to 10,000 Co Cork residents is to seek to overturn a High Court decision which allows Transport Infrastructure Ireland to proceed with plans for a €220 million motorway on the outskirts of the city.

The M28 Steering Group was set up to represent residents in Rochestown, Douglas and Mount Oval opposed to Transport Infrastructure Ireland’s plans to upgrade the N28 Cork to Ringaskiddy road.

The group appealed the decision by An Bord Pleanála in 2018 to grant planning permission for the upgrade to the High Court. However, Mr Justice Michael MacGrath ruled on December 20th that the court was not convinced that the project was not properly assessed by the board before it made its decision.

M28 Steering Group spokesman Ger Harrington said it had decided after reviewing its legal advice on the judgement to try to overturn the ruling.

Mr Harrington said the group had now instructed its legal team to seek a certificate from Mr Justice MacGrath in the High Court this Thursday that would allow it to bring its case to the Court of Appeal.

He said in the event of that application being refused, the M28 Steering Group would then seek to petition the Supreme Court to to grant them a judicial review of the decision.

The group claims the board’s decision is flawed on several grounds including the application for permission to build the road was premature, incomplete and did not meet domestic and European requirements.

An Bord Pleanála confirmed in July 2018 that its inspector Mary Kenneally had recommended that planning permission be granted for the upgrade with conditions under the Strategic Infrastructure Act.

The proposed motorway runs along the route of the existing N28 from near Carrigaline to Cork’s southern suburbs and would involve the acquisition of 141.5 hectares of land through Compulsory Purchase Orders.

Michelle O’Sullivan, policy and research executive with Cork Chamber, told an oral hearing into the proposal that the upgrade would allow further growth of the pharma sector in Ringaskiddy, in which some 5,000 people are employed.

The proposed motorway was also supported by Cork County Council and Cork City Council as well as the Port of Cork, which is moving its operations from the city quays and Tivoli to Ringaskiddy.

Port of Cork senior engineer Henry Kingston told the oral hearing that the upgrade was essential for the move, which would free-up some 220 hectares of land in the city for business and residential development.

The M28 Steering Group argued that the upgrade, which would see the number of vehicles on the route increase from 9.5 million to 24 million per year, would have a hugely detrimental effect on local communities.

It would lead to increased air and noise pollution for families living adjacent to the route with the motorway coming within three metres of some houses, the group said. They also argued it would lead to further congestion at the Bloomfield Junction on the N40 Southern Ring Road.