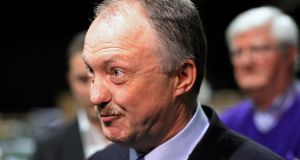 One of the certainties in Dublin Bay North is that Fianna Fáil’s Seán Haughey will keep his seat. File photograph: Eric Luke

There are a couple of certainties in Dublin Bay North. One is that poll-topping Fine Gael Minister Richard Bruton will get elected. The other is that Fianna Fáil’s Seán Haughey will also keep his seat.

For Green Party councillor David Healy, his day has finally come and he is expected to take a seat – on his fifth attempt. A councillor for 15 of the past 20 years for Howth-Malahide, he lost his local authority seat in 2009 when the Green tide went out with the boom.

The last minute decision of Independent Tommy Broughan to stand down along with that of colourful Independent Alliance Minister of State Finian McGrath changes the dynamic and opens the race up.

McGrath’s retirement is expected to most favour Labour’s Aodhán Ó Ríordáin, who lost his Dáil seat at the 2016 election when that party fell out of favour with the electorate.

Broughan’s votes will improve the chances of Social Democrats councillor Cian O’Callaghan, a former Labour member, but some transfers could also go to low-key but diligent Sinn Féin TD Denise Mitchell whose seat is seen as vulnerable.

Independent and former People Before Profit councillor John Lyons is expected to poll well and his transfers could affect the outcome for the last two seats.

On a really good day for Fianna Fáil and with proper vote management, hardworking councillor Deirdre Heney could cause a surprise and provide the party’s second seat.

TDs are reluctant to vote-manage the constituency but Bruton has shared some of the leafier suburbs such as Sutton and Howth with his running mate Senator Catherine Noone. However, with the tide turning against a two-term Government, a second seat for Fine Gael is quite the stretch.

Dublin Bay North was considered one of the “constituencies of death” in 2016 because of the crowded field, with former Fianna Fáil senator Averil Power in a two-day count tussle with Haughey. Broughan was thought to be gone early on but his work on the ground proved sufficiently transfer friendly to keep the seat he was first elected to in 1992.

Stretching from Howth in as far as Dublin Airport, down to Clontarf and Marino and over to Coolock, Artane and Darndale, this constituency has nearly always been in the top three for turnout at elections and referendums.

Violent crime, drugs and antisocial behaviour is a major issue in parts of this constituency, which has been severely affected by a spate of murders in the past year. Cuts in community and youth diversionary services are seen as part of this.

Health including elderly care, housing shortages and overcrowding, poorly built homes and planning, including the development of swathes of apartment blocks, are also significant issues.