Chopsticks on the table, Mandarin on signs: Irish tourism puts out for Chinese visitors 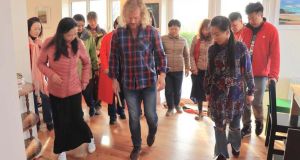 Musician Brendan Keegan delivering a a sean nós dance class to Chinese guests at Glen Keen Farm, Co Mayo. Thousands of Chinese visitors have been to the facility since 2014.

Maps are funny things. They can place a country at the centre of the world or make it seem like it is falling off it. But while life on the edge can lend a place a remoteness and make it feel out of reach, it can also come with huge advantages.

“If you look at a map of the world in China, Ireland is on the very edge of the world,” says the Fáilte Ireland Paul Kelly chief executive as he discusses ways to grow tourism numbers from that country. “That enables us to market Ireland in a unique way.”

And marketing Ireland to China in a unique way is becoming increasingly important as we look at ways to lessen our dependence on British tourists in a post-Brexit world.

How to make Ireland China-ready has been occupying the minds of tourist authorities, retailers and service providers for more than a decade, with visitors from that country said to be worth a lot more to the local economy than British or European ones. Many of China’s visitors are categorised as luxury tourists with the potential to spend between 3.5 and 10 times more than the average visitor.

Not only do Chinese visitors spend more, there are also a lot more of them. China is the fastest-growing outbound travel market in the world with the numbers predicted to grow to 200 million by 2020 - double what it was in 2014.

To date, Ireland has managed to slice itself just a small sliver of this pie - last year, 70,000 Chinese visitors travelled to Ireland - but with more direct flights from Beijing and Hong Kong coming on stream, that number will substantially increase. The authorities here are hoping to grow the visitor count to 175,000 per year by 2025.

They have had some help over the last 12 months. Chinese tourists are booking more and more online with travel giant C-Trip - the leading online travel agent in China and the second largest travel agency in the world.

Last year Ireland was named the “best overseas self-drive touring destination” at an awards ceremony organised by the site, with the citation referencing Ireland’s stunning routes and great driving experiences, including the Wild Atlantic Way and the Causeway Coastal Route.

The opening of more direct routes from Chinese airports and combined visa arrangements in place covering Ireland and the UK have made things better but there is more work to be done.

The big challenge, Kelly says, is “being able to look after the Chinese visitors when they’re here because they have different needs than your Western European or North American visitor in terms of the cultural nuances, in terms of food and beverage offering.

“They don’t want an Irish breakfast at breakfast time they want noodles at breakfast time. The way they eat is more communal, with sharing plates and things like that. They have different expectations of hotel bedrooms, they like their water served at a different temperature and they want to eat with chopsticks. We’re trying to train the industry as to what they should provide.”

One thing Ireland won’t have to work at when it comes to attracting more Chinese visitors is landscape. “They don’t know about Aran jumpers or about Guinness and stuff like that but getting out in the countryside, simple things like farm visits - they are hugely popular amongst Chinese visitors because so many of them are urban based. The ability to be able to just visit a farm is a big attraction, the natural landscapes, the coastal scenery, the hills and lakes just getting out in the fresh air is a big attraction to them.”

For inspiration, the Irish tourism authorities have been eying New Zealand. “It now has 17 direct flights a week from China to New Zealand but Dublin is closer to Beijing than Auckland,” Kelly says. “And we can take advantage of that.

“There is lots of opportunity there and we’re only scratching the surface. We’ve got to build that over time. Getting the direct flights was one of the key things and our colleagues in Tourism Ireland are working with the Department of Justice to get a get a visa regime that is easier. That’s a real challenge for us - it takes longer and is more complicated to get an Irish visa than it is to get a visa for the Schengen countries in Europe.”

Fáilte Ireland has developed a “China-Ready Programme” to ensure tourism businesses are prepared and culturally aware of the requirements of Chinese visitors.

Glen Keen Farm in Co Mayo is one of the largest farms in Ireland’s agri-tourism sector with over 1,400 acres on which sheep roam freely. The farm is on the Wild Atlantic Way, 6.2 miles from Louisburgh on the Leenane road and close to Killary Harbour. It has been in the same family since 1700s when the current owner’s ancestors, the O’Malleys, became tenant farmers.

It is already China-ready. “I took over the family farm in 2003 and I realised that if we were going to stay in business we would need to change the way we do things and start attracting visitors,” says Catherine O’Grady Powers.

She decided to combine tourism with traditional sheep farming but because the farm is in a special area of conservation, she had to travel a long road to make it happen. “There was a whole lot of hoops to jump through and once we had done all that we decided to go after the tour operator market rather than individual tourists.”

The farm opened as a tourism destination in the summer of 2014 and while the initial focus was on the US and European markets, O’Grady Power’s horizons quickly widened. “We are attracting people from places that we never dreamed we would be attracting them from. China has become a really important market to us.”

She says she felt like she was pushing an open door when she went on a scouting mission to Shanghai in 2017 and within weeks she had representatives from three Chinese tour operators in the farm.

She says the thousands of Chinese visitors who have made there way to her farm have been “really interested in sheep farming, the herding and the tactile experience of feeding the lambs, processing the wool and shearing the sheep.”

But she has also been savvy enough to widen her offering. She teamed up with a neighbour Brendan Keegan who teaches them how to play bodhrán and another neighbour who teaches sean nós singing. The also learn Irish dancing.

“They love all that and they love the natural environment and getting close to nature. We have added chopsticks to our table settings and we offer bowls of noodles and and we have signage in Mandarin to make it a little bit easier for our Chinese visitors.”

1 Coronavirus: 442 new cases, 4 deaths as stricter house visitor limits introduced
2 Covid-19 infections from funeral led to a third of one restaurant’s staff self-isolating
3 Dr Tony Holohan expected to return to his post next week
4 'The Bill is there to give people a more dignified end,' says man (53) with terminal cancer
5 Families of St John of God residents concerned over HSE takeover
Real news has value SUBSCRIBE