Thieves try and rip ATM from shop wall in Tyrone 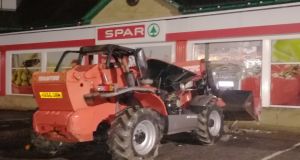 Thieves tried to rip a cash machine from the wall of a shop in Omagh, Co Tyrone, early this morning.

The attempted robbery happened at a Spar store at Old Mountfield at about 4am.

A stolen digger was found at the scene and police believe the thieves tried to use it to dislodge the built-in ATM.

Police believe the vehicle, which was set on fire after the incident, had been stolen from a nearby building site.

The PSNI has appealed for information about a dark-coloured Volkswagen Passat which travelled towards Cookstown after the incident.