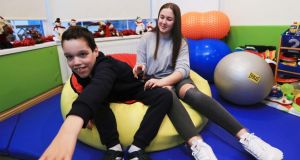 Monday heralds the return to school for most young people after a relaxing Christmas and New Year without homework. But for young carers such as Shauna Tighe (14) the past fortnight has been anything but a break.

Shauna helps to care for her brother Daniel (11) who has a rare genetic condition called Sotos syndrome. This causes severe intellectual disability, epilepsy and a sensory-processing disorder.

Their mother, Sinéad Tighe, says Shauna is sometimes anxious about leaving Daniel to go out with her friends until she knows Daniel is okay, and describes her daughter’s support as vital.

“It’s sad to say that you have to use your eldest child to help you out. Dan has quite challenging behaviour and he’s hard to manage. Shauna is the best person to calm him down,” she said.

The Christmas break can add more pressure on families like theirs. Daniel’s school, Child Vision in Drumcondra, Dublin, was closed for a fortnight and a lack of respite care meant a heavier burden fell on Shauna.

The schoolgirl says carers want to spend time with their loved ones, but more respite for carers is needed.

“It’s very hard to have visitors over or to go out and visit people spontaneously – everything has to be planned. If we had more help during Christmas it would give us a chance to do things other families take for granted,” she says.

During the school term, Shauna wakes up at about 6am to get Daniel up and help him start his day before she goes to school.

“He can’t do anything for himself so I have to spoon-feed him like a baby, help him get upstairs, wash him, dress him, do his hair, give him his medication, help him get down the stairs and put him in his wheelchair,” she says.

“He comes in from school earlier than me so as soon as I get in the door I help my mam make his dinner. He won’t eat unless I sit with him, so I have to stay there until he finishes it. He gets bored very easily so you always have to keep him occupied or he will throw a tantrum.

“Everything in the house revolves around Daniel because you constantly have to mind him and keep him occupied. It can be very draining but we have to keep him happy.”

There’s no help for Shauna and no break for her at Christmas. Siblings are not thought of

For young carers such as Shauna, Christmas was a day like any other.

“Christmas is just the same as any other day for Daniel too because he has no concept of what it means. We get him Christmas presents and put them under the tree but he doesn’t understand what’s going on and doesn’t like his normal routine being disrupted.

“If we change his routine or try and get him to play with his presents he will throw a tantrum or get upset as he’d rather do what he does every other day of the year so it’s tough,” she says.

Daniel gets some respite three days a week for two hours a time with weekend respite two or three times a year.

“We get eight hours of home care a week. It isn’t the right care for Daniel as they’re not equipped to give him his medication. My mam and I have to manage the care around when he gets his medication so while it should be a break; you’re always on edge,” says Shauna, who won Young Carer of the Year for the Dublin area in the national CarePlus 2018 award scheme.

She says she wants to use her platform to highlight the inadequate support for young carers.

Sinéad says Christmas can be “an awful time of year” for carers “because you’re trying to put your best face on for everyone”.

“Christmas just highlights the isolation and loneliness you feel at as a carer,” she says.

Sinéad says she wants more services and respite for young carers like her daughter.

“There’s no help for Shauna and no break for her at Christmas. Siblings are not thought of. Even if I have a carer to look after Daniel I have to be there or Shauna has to be there. We’d really like to see counselling or family therapy for siblings of young people who are carers,” she says.