People with outstanding fines can call libraries to have membership reinstated 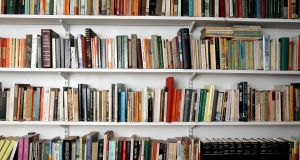 Under the plan, nearly 200 of the State’s 330 public libraries will open for longer.

Library users no longer have to pay fines for overdue books as part of plans to double the number of library visitors over the next five years.

The abolition of fines, which will also see all existing fines cancelled, is one strand of a plan aimed at giving members more opportunities to study, use wifi, hold meetings, and to use free “hot-desking” facilities to work remotely from offices.

Under the plan, nearly 200 of the State’s 330 public libraries will open for longer, while the public will be able to take and return books when the libraries are unmanned using scanners.

The plan, which will be backed by nearly € 5 million in funding, aims to double library membership from 750,000 to 1.5 million within the next five years.

There are also wider plans to upgrade dozens of libraries, develop digital learning centres in all suitable libraries and position libraries as a community hub.

Dublin City Council said on Thursday people whose membership has been suspended over unpaid fines can have it reinstated by calling to the library, and there will be no fines to pay.

“Libraries are an invaluable resource for all in the community and we want to remove any barriers that might prevent people making full use of them,” he said.

“That is why we are eliminating fines and other charges. Libraries are welcoming spaces where all members of the community can access knowledge, ideas and information, and where people can reflect, connect and learn.

“Research has shown that people view fines as a barrier to membership and usage of libraries. In addition, fines disproportionately affect those on lower incomes and can create a negative association with library use for children.

“There is evidence that library services which have removed fines see an increase in usage following their removal and we very much hope that will be reflected now in our library services.

“We invite everyone to visit their local library during January and see for themselves all that is on offer there, completely free. We can promise that a resolution to use your library more is one you will find very easy to keep throughout the year.”