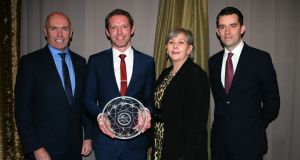 Cervical smear test campaigner Stephen Teap has won Cork Person of the Year for 2019 and he dedicated the award to his late wife, Irene Teap and all the other women and families affected by the cervical smear debacle.

Mr Teap lost his wife Irene (35) to cervical cancer in 2017 after two cervical smear tests were misread, leaving him a widower at the age of 36 to rear two young sons, Oscar and Noah, who were just four and two at the time.

“These events for me are quite emotional – it’s bitter sweet for me because it reminds me of the road that brought me here and I really shouldn’t be here because Irene, not only did not have to die, she did not have to get cancer,” he said today after winning the award.

“I do what I do, not for any personal reward – my aim is to try and prevent what happened to me and my family happening to others but what this award does mean is that my family and the other families affected are being heard.”

Accepting the award from Lord Mayor of Cork Cllr John Sheehan and Mayor of Cork County, Cllr Christopher O’Sullivan, Mr Teap dedicated the award to all the other campaigners and families affected by the cervical smear debacle.

Mr Teap said the most important thing for him now is identifying the mistakes made in the past in the case of his late wife and campaigners, such as Vicky Phelan and Lorraine Walsh and the other 400 women affected by the scandal.

“Everything that happened to us was preventable, it doesn’t have to be the case that I’m up here receiving an award but I am honoured to receive this award on behalf of all the women and families, I am very grateful for the recognition.

“There are many women too sick or too afraid to speak out and this is why I am lending my voice to them and why I am dedicating this award to all of the women and families and children that have been left behind by this debacle.”

Mr Teap received a standing ovation for his acceptance speech from the 250 invited guests at the 27th Cork Person of the Year Awards where 12 monthly winners went forward to compete for the overall honour.

Also honoured was Fermoy born entrepreneur, philanthropist and founder of Irish Business Against Litter, Dr Tom Kavanagh who received a Hall of Fame Award in recognition of his lifetime contribution to Cork life.

Political analyst and historian, John Bowman was made an Honorary Corkman while recently retired Nationwide presenter, Mary Kennedy received a Special Achievement Award for her work on the programme which is made in Cork.