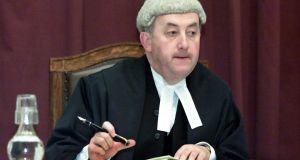 Report being prepared by the President of the High Court, Mr Justice Peter Kelly, who is retiring in June, will change civil court rules “that haven’t been changed since the 1880s”. Photograph: Colin Keegan

A massive increase in the use of technology in the courts, including allowing online guilty pleas for less serious offences and streamed sittings that interested parties could contribute to remotely, are among proposals in a programme that could cost €100 million over the next 10 years.

A 120-page report setting out the proposed implementation of a “digital first” strategy for the Courts Service is due to be published shortly, while a major plan for the modernisation of civil-law procedures in the High Court is also nearing completion.

The Courts Service and the judiciary are hoping that the introduction of updated procedures, and the use of state-of-the-art technology, will help convince the Government to put more money into the State’s creaking courts service.

“There is no point in us asking for money if we are doing things in an old-fashioned way,” said one informed source.

A report being prepared by the President of the High Court, Mr Justice Peter Kelly, who is retiring in June, will change civil court rules “that haven’t been changed since the 1880s”, he said.

When court rules suitable for the 21st century are introduced, the Courts Service will then look at introducing IT systems to operate the new procedures in the High Court and cases elsewhere across the courts system.

The Irish judiciary and the Courts Service have been examining how courts services elsewhere are making use of technology to make justice more accessible, reduce costs, and increase efficiency.

Victoria, in Australia, where the distances people can have to travel to attend court has promoted the use of more IT, is one of the locations that has been looked at.

A lot of the pre-trial civil procedure there is done online. “You can track case progression online, you can do all sorts of stuff online, without physically attending court. That’s the sort of stuff we’re looking at doing. But you need to simplify the processes first.”

In a report submitted recently to the Department of Public Expenditure and Reform, the Courts Service said that many of its current IT systems are not fit for purpose and that acquiring a truly digital service will require “significant investment”.

The paper noted that qualified IT staff expect to be well paid and gave an estimate of €16.5 million for “investing in our people”.

A further €415 million was given as the required expenditure on buildings and other physical infrastructure.

The Government has approved €80 million for a family law courts building on the Hammond Lane site on Church Street, Dublin.

However the Courts Service and the judiciary want €120 million for a building that would also accommodate the Supreme Court, which would move from the Four Courts on the quays.