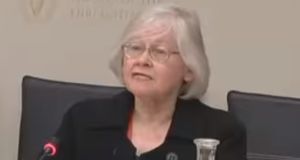 The founder of Immigration Control Platform, which wants tougher immigration rules, Áine Ní Chonaill said she made her will in 2009, leaving almost her entire estate to the university, where the former Cork school teacher studied.

Immigration campaigner Áine Ní Chonaill has said she is revoking a bequest worth “several hundreds of thousands” of euro to University College Cork (UCC) over its support for a family seeking asylum in Ireland.

The founder of Immigration Control Platform, which wants tougher immigration rules, said she made her will in 2009, leaving almost her entire estate to the university, where the former Cork school teacher studied.

However, she said she would revoke this on Monday in protest at UCC’s backing of one of its students, Hamza Khan, who is studying computer science under a Sanctuary Scholarship, granted to refugees and asylum seekers.

Mr Hamza (20), his brothers Zubair (17), Umair (16) and Mutjuba (14), their sister Shazadi (21) and parents Mubeen and Hina were spared deportation this week after a last minute intervention by Minister for Justice Charlie Flanagan.

Their case is to reviewed following a campaign to let them stay in Ireland after they had been being refused international protection.

Ms Ní Chonaill said it was “utterly irrelevant” that the siblings have been backed and praised for their performance by teachers and lecturers, and accused UCC of “unacceptable arrogance” by calling for the Khans to be allowed stay despite being refused protection by the authorities.

“Have I anything particular against the Khan family? Nothing, except they are a classic case for deportation,” she said.

The Khans came to Ireland through the UK in 2017 from Saudi Arabia where all five siblings were born.

The parents fled Pakistan in 1984 due to persecution and moved to Saudi Arabia but were forced to leave there when new laws imposed punitive taxes on foreigners.

The family, who live at the Direct Provision Centre on the Kinsale Road in Cork, applied for asylum but on December 18th were told they failed in their application.

Their plea to stay is being supported by their schools, UCC and the Edmund Rice Trust.

“My quarrel is with UCC effectively taking the position that once they have given a sanctuary scholarship to someone in the asylum process they must not, and their family must not, be removed from the country,” said Ms Ni Chonaill.

Ms Ní Chonaill said she did not object to appeals made through the official appeals process but claimed authorities have an “overblown tendency” to give leave to remain here to asylum seekers refused international protection.

Humanitarian leave to remain can be granted where deportation authorities assess family units as a single case, giving full consideration to all aspects of the case, including rights under the European Convention of Human Rights.

Latest published figures from the Department of Justice show the number of children granted humanitarian leave to remain in Ireland has fell from 638 in 2015 to 152 last year.

Ms Ní Chonaill also claimed the minister’s power to revoke deportation order after a review is “used far too generously and particularly where there is public pressure”.

She said she would be “annoyed” if it was decided not to deport the Khans and that she would not reinstate her bequest to UCC even if a judicial or ministerial review found in favour of the family staying.

It is presently worth “several hundreds of thousands” of euro.

Asked how many people are involved in Immigration Control Platform, she said: “I never get into that”.

In a statement, UCC said: “Since becoming a University of Sanctuary in 2018, UCC offers a pathway to education for asylum seekers and refugees, who obtain the required academic merit. UCC will continue to support equality and diversity in society.”

Three of the Khan brothers attend Coláiste Eamonn Rís, formerly Deerpark CBS in Cork, where principal Aaron Wolfe said staff and pupils fully support the Khans, who have become an integral part of the school community since their arrival in the city.

Before gaining a place at UCC, Hamza also attended the same school, where he won the Most Improved Student award 2018 and Student of the Year award in 2019.