One employee working in the unit received injuries following the fire 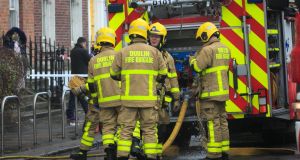 Dublin Fire Brigade has put out to large a fire that broke out at an industrial site in Swords, north Co Dublin on Friday morning.

The fire started as the result of an industrial accident and quickly spread through a large commercial unit in Kettles Lane.

In total seven Fire Brigade units attended the scene following an emergency call at 9.40am.

One employee working in the commercial unit at the time received injuries after the blaze broke out and was treated by paramedics at the scene.

Units brought the fire under control with a turntable ladder raised above the roof of the industrial unit to act as a water tower.

After the fire was extinguished several units remained at the scene for a number of hours to dampen down the surrounding area.