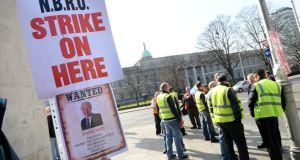 The NBRU and Siptu say the strike at Bus Éireann will continue while talks on resolving the dispute at the company will continue at the Workplace Relations Commission. File photograph: Dara Mac Dónaill/The Irish Times

Talks are continuing at the Workplace Relations Commission on Thursday in a bid to bring the strike at Bus Éireann to an end.

The industrial action entered its 14th day on Thursday. Unions have insisted they would not be removing pickets during the new round of negotiations.

Speaking at the start of the talks on Wednesday, Dermot O’Leary, general secretary of the National Bus and Rail Union (NBRU), said he was not entering the new process with any great optimism.

He said there was a very strong resolve among his members that they would not leave the process until there was something substantial set out that they could vote on.

The NBRU and Siptu said the strike would continue in the meantime.

Siptu has said it has members in Munster who have been dismissed and that others had had their pay cut by €250-€300 per week.

The unions have indicated they will seek to focus in the the new talks on the contribution management will make towards saving Bus Éireann, which is facing potential insolvency in the weeks ahead.

The strike began a fortnight ago in protest at plans by management to introduce new cost-saving efficiency measures and work practice changes without agreement.

The company has argued that the moves are essential to stave off impending insolvency.