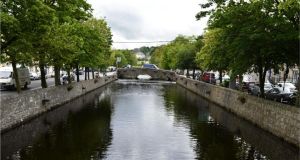 A view of Westport, Co. Mayo. Photograph: The Irish Times

Some towns are beating out-of-town shopping centres thanks to a system of ‘health checks’, a conference will be told today.

The annual conference of the Irish Planning Institute (IPI) in Mayo will hear how the pilot scheme is helping keeping towns like Tralee, Co Kerry, and Dundalk, Co Louth, vibrant places for people to live, socialise and shop.

Nine towns recently took part in a pilot version of the check, run with the aid of the Planning Institute, the Heritage Council and statutory authorities.

A similar scheme is run by Retail Excellence Ireland, which has about 3,500 members, including out-of town supermarket owners.

In an address to the IPI conference, being held in Westport, chief executive David Fitzsimons said the shopping future of towns is inextricably linked with vibrancy and environment.

“We drew our plan without regard to who owns the land,” he said, pointing to the area’s “greenways” - pedestrianised routes suitable for children and bikes. Supermarkets are all within Westport’s town core.

Ten years ago the local authority provided a 25-metre swimming pool, but in recent times a voluntary community effort led to the provision of the town theatre.

“That is the direction things move in as local authorities leverage the ‘buy-in’ of the local community,” Mr Wall said.

He credits the approach to Billy Houlihan, an architect formerly with Cork County Council, who, he says, showed what could be done with Kinsale and Clonakilty.

“We have a beautiful Georgian street in Denny Street, we have a very attractive public realm, there are green spaces, we have beautiful pavements, we have lovely old buildings.”

Tara Buckley of RGDATA said “ribbon development” on the ourskirts of towns should be jettisoned in favour of redevelopment in town centres, but she said this was often not the case.

She called for a full-time “health check” office to be set up in the Department of Planning.

Retail and housing strategies that favour town centres ahead of ribbon development are already part of planning guidelines, but these are not always reflected in local area plans, Ms Buckley said.

The Westport conference, titled “Reimagining the Planning System: Making it Work”, will also hear a keynote speech from Minister for Housing and Planning Simon Coveney.

For information on the Revitalising Towns Initiative, see here.

For information on the Westport master plan, Westport 2000, see here.

The Department of Housing and Planning is finalising new incentives for people to refurbish vacant buildings in towns centres.

The move follows recognition that previous “living-over-the-shop” tax incentives have not been very successful in shifting behaviour from rural housing and ribbon development on the outskirts of towns.

The new scheme will be in addition to the department’s Social Housing Regeneration Programme and the recently announced “Repair and Lease” and “Buy and Renew” schemes that offer support for town dwellers.

The Minister for Urban Renewal, Damien English, said the new scheme will aim to bring vacant units back into productive use. “It is my intention to announce the new urban regeneration measures arising from that process in the weeks ahead,” he told The Irish Times

“People living in the town centres will automatically generate activity, and when there are people around, it makes it a much nicer place to live,” she said.

“Perhaps young people or first-time buyers that want to buy their first home, maybe they would consider moving into the centre of the town. I am looking at how we would assist them, maybe by way of a grant to help them adapt the home to modern living,” she said.