Some 22,500 more people left country than came in during the five year period to 2016 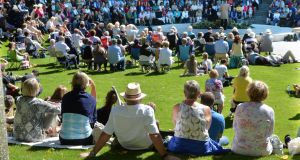 Census 2016 shows there were 4,761,865 people living in the State on April 24th last year. This is the slowest rate of increase recorded since the 1991- 1996 census period. Photograph: Alan Betson / The Irish Times

Ireland is now a country with older and less religious people and with more migrants and travellers, and we are speaking less Irish, according to the first results from Census 2016.

The population of Ireland rose by 3.8 per cent between April 2011 and April 2016, according to results from the Central Statistic Office (CSO) published today.

Based on the census conducted on every home in the country on April 24th last year, the population on that night was 4,761,865. This is the slowest rate of increase recorded since the 1991- 1996 census period.

Population change between 2011 to 2016 was largely driven by natural increase, with births outnumbering deaths by 196,000.

Overall migration patterns over the five years revealed that 22,500 more people left the country than entered it.

There are 810,000 foreign-born people in Ireland, representing 17.3 per cent of the population. The number of Poles was virtually unchanged, and they remain the largest single foreign nationality in the country, followed by the UK and Lithuania.

The largest increases in foreign nationals since 2011 were from people born in Romania and Brazil. Meanwhile, the number of people holding dual Irish nationality almost doubled from 55,905 in 2011 to 104,784 in 2016.

There were significant changes in the responses to questions about religion, with 78 per cent of the population, or 3.7 million people, declaring themselves as Roman Catholic, a fall of 132,220 from 2011, when Catholics represented 84 per cent.

According to the Census 37.6 per cent of the population is married and there are 97.8 males for every 100 females in the country.

Seventy per cent of households in the State have broadband access, but this varies from almost 80 per cent in Dublin city and suburbs to 61 per cent in rural areas.

The data is the first release of information given by the people of Ireland on April 24th last year and another 13 reports based on what was in the forms are to be published this year.

Deirdre Cullen, CSO senior statistician, said there would be a focus on housing, the homeless, religion, disability and carers.

“This could not have been achieved without the civic-minded participation of the Irish public, and the commitment and dedication of all of the census staff, and I want to thank all concerned,” she said.

“The results will provide us with a greater insight and understanding of Ireland today.”