Budget 2021: Who will be the winners and losers? 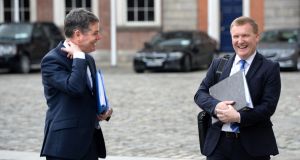 There is a contradiction at the heart of Budget 2021. Billions of euro will be pumped into the economy but much of the money will be used to prop up the economy, not grow it.

Will people even notice? How has the Coalition put together this budget like no other? And how will the extraordinary political, social and economic consequences of Covid-19 be managed?

There will be clear winners among some departments next Tuesday, including social welfare, health and jobs while the Simon Harris-led new Department of Further Education will be tasked with retraining people and get them back to work.

Big-spending departments such as housing, as well as Green Party leader Eamon Ryan’s transport and energy departments, will do well, too, as the Government seeks to make good on promises in its programme for government pledges.

One fairly simple formula is being followed. If a measure can honour pledges, or be shown to be useful in coping with the challenges of Covid-19 or Brexit, it is looked upon favourably.

Those involved say this budget preparation has been markedly different to that of recent years, though there is praise for the way Minister for Public Expenditure Michael McGrath has handled bilateral meetings.

Previously, such gatherings were tight affairs, with just three or four people involved. Coalition government. especially one involving three parties, requires greater numbers to be involved. Senior Ministers are accompanied by their junior colleagues from the other parties. Previously, they would often have been left in the corridor. Senior officials are there, too.

Ossian Smyth, the Green Party Minister of State at the Department of Public Expenditure, has, for example, frequently been at McGrath’s side during such meetings.

Meanwhile, the relationship between McGrath and Minister for Finance Paschal Donohoe is thought to be functioning well, partly because they became used to each during the days of confidence and supply. Back then, the Fianna Fáil man was on the Opposition benches, but was closely involved in framing the budget. “You could argue they wrote the last three or four budgets together,” says one Minister. A well-placed source said McGrath and Donohoe’s relationship is “the only functional element of a deeply dysfunctional Government”.

Much of the framework for the talks was laid down in the July stimulus plan, which has acted as a kind of policy petri dish. A wide variety of ideas were then thrown together and vetted by McGrath and Donohoe.

The successful ones will be extended; the ineffective ones dropped. For example, the Apprenticeship Incentivisation Scheme will be extended, but the cut in VAT from 23 to 21 per cent will be allowed to lapse.

Other tax measures championed by some parties, such as Fianna Fáil’s desired cuts in Capital Gains Tax, will not be adopted, due to ongoing opposition from the Greens.

The perennial ask from the hospitality sector, that the bailout-era VAT cut to nine per cent be restored, is in the balance. Traditional opposition from the Department of Finance is compounded by a sense that such a cut will make little difference.

Nothing will be done to hurt construction or property; these sectors offer jobs and tax revenues. Therefore, cash raids on property investment funds in the shape of the stamp duty reforms seen in recent years are unlikely.

In a world where Government expects pubs and restaurants to be closed for significant chunks of the year to come, it may be that broader and simpler cash transfers will be preferred.

Enhanced and expanded grants are almost certain, tightly targeted at “frozen” sectors of the economy, with sector-specific local authority rates holidays for businesses, in preference to blanket exemptions, to keep companies “alive”. These reforms will form a core part of Fine Gael post-budget trumpeting, so it is no surprise that much of it will be channelled through Tánaiste Leo Varadkar’s department.

Fianna Fáil will point to large capital spending, especially on housing, which is controlled by Fianna Fáil Minister Daragh O’Brien.

Massive spending by the Department of Health is a foregone conclusion.

The contradictory nature of Budget 2021 is brought into sharp focus by the challenges facing the Green Party. Its leader will be able to point to massively increased capital spending in key areas. Money for retrofitting is expected, along with more investment in cycling and walking. However, the party’s policies may also throw up potential landmines.

Reforms to vehicle tax, targeting gas guzzlers, are almost certain; one senior source says it is the unavoidable consequence of binding targets on climate change. “You can have as many SUVs as you like, but then you can’t have cows.”

Privately, the Greens insist the measures will actually make things cheaper for the majority of motorists, but they concede that “a lot of people will see it as a story of increasing costs”.

Ryan will also face probable pushback from his own backbenchers who want to see social justice measures, such as increased spending on mental health and disability services. In remarks that are close to Sinn Féin’s budgetary speaking points, one Green backbencher called for higher deficit spending, in line with other European countries, to support these measures. “It would be very, very difficult to vote for a budget without those things properly funded,” warned the backbencher.

It is also a big budget for Sinn Féin. Pearse Doherty will deliver the first full-throated Opposition rebuff to the budget in several years, again, a consequence of confidence and supply.

Doherty, though, will have to convince voters that the Government’s response is under-powered, and that much of the extra money is not to stimulate the economy, but to sustain the response to the pandemic.

To mangle former Labour minister Pat Rabbitte’s metaphor, Sinn Féin will hope that for consumers, extra PPE and hand sanitiser will butter no parsnips. Its alternate budget, which would add €5.3 billion to spending, will be key to his argument.

Meanwhile, there is also the prospect of yet more cash making its way into the economy. The national economic recovery plan will be launched next month, and there is the promise of significant extra funding associated with both Brexit and Covid response funds from Brussels.

As the Government faces into huge uncertainty, the sense is that these may act as a reserve fuel tank, deployed to top up schemes – or indeed entire departments – as they exhaust their allocations. One candidate for such a top-up would be funding further extensions to the Pandemic Unemployment Payment, which has already been flagged by Minister for Social Protection Heather Humphreys. However, the rate will not be restored to the top level of €350.

As in any budget, even in a budget like none before, there will be winners and losers.